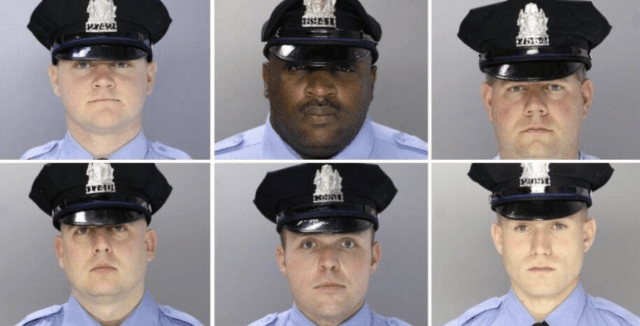 PHILADELPHIA – The homicidal Philly suspect accused of shooting six police officers during a seven-hour standoff on Wednesday has been charged with attempted murder, authorities said.

Maurice Hill, 36, faces multiple counts of attempted murder, assault on a law enforcement officer, aggravated assault and reckless endangering, FOX 29 reported Saturday. Hill is being held without bail and is scheduled to appear in court Sept. 5.

Hill began firing on officers on Wednesday as they were serving a narcotics warrant, a situation, which Philadelphia Police Commissioner Richard Ross has said “went awry almost immediately.”

Law enforcement authorities say Hill fired more than 100 rounds throughout the course of the hours-long standoff, which ended early Thursday when Hill surrendered after police deployed tear gas. Moreover, Ross expressed amazement that the standoff ended with no deaths and no life-threatening injuries.

The six Philadelphia cops who were shot and wounded were taken to area hospitals and later released Wednesday night.

The homicidal Philly suspect has an extensive criminal record. His criminal background includes multiple arrests in Philadelphia and adjacent Delaware County between 2001 and 2012, according to online records. His criminal convictions include assault, perjury, fleeing and eluding, escape and weapons offenses.

Hill served three stints in state prison, according to FOX 29. He was also sentenced to 55 months in federal prison over a pair of convictions for being a felon in possession of firearms.

The incarcerated man reportedly used a semi-automatic rifle and a handgun during the shooting. According to authorities, possession of these weapons were further violations of law due to his criminal record.

The Philadelphia Inquirer reported that four other men were charged with drug offenses in connection with the standoff; two were trapped in the house along with the gunman and two Philadelphia police officers.

The paper reported that Hill was arraigned via video conference. He sat with arms crossed and head down, responding, “I guess” when asked whether he understood the charges.

“I am not an immediate danger,” he said after a prosecutor argued for denial of bail. His statement is in sharp contrast to his recent actions.

The shooting began around 4:30 p.m. Wednesday when Hill is accused of opening fire on officers who were serving a warrant for his arrest.

The officers had to quickly flee the spray of bullets by escaping through windows and doors, according to Ross.

Two officers remained trapped inside the house until about 9:30 p.m., along with three hostages. A SWAT team freed the officer and others, but Hill remained inside.

Hill’s lawyer, Shaka Johnson, said Hill called him during the standoff asking for help surrendering. Johnson then called Philadelphia District Attorney Larry Krasner, and they patched in both Hill and the police commissioner, according to Krasner.

Hill told Johnson he wanted to make it out alive to see his newborn daughter and teenage son again. Krasner told the Inquirer that when Hill asked what kind of punishment he would face, the district attorney responded “25 years.”

“Then he said 20 and I said OK,” said Krasner, who explained to the paper that this apparent agreement was “bulls**t from the beginning.”

“I would have gone roller skating with the man if that would have gotten him out of there,” joked Krasner, who added that the suspect appeared to be intoxicated or under the influence of prescription drugs during the standoff.