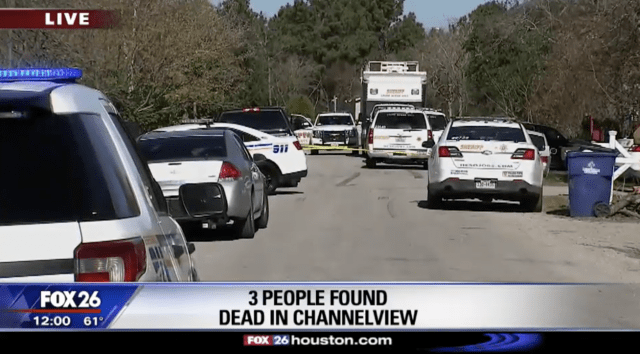 CHANNELVIEW, Texas – A Texas homeowner was wounded, but fatally shot three suspects who broke into his house on Monday morning.

The incident began at approximately 10 a.m. at a mobile home on Amie Michele Lane, Fox 35 reported.

Gallegos’ unnamed roommate later told detectives that he noticed a vehicle backing into their driveway just before he spotted three men approaching the home, reported the Houston Chronicle.

According to reports, at least one of the suspects was armed with a gun.

He quickly found a place to hide as the three men burst into the residence.

However, Gallegos grabbed a shotgun and ran towards the commotion, then opened fire on the armed intruders.

One of the intruders also fired at Gallegos, hitting him multiple times.

Gallegos’ parents, Lino Perez and Maria Guadalupe Gallegos, live just down the street from the home where their son was shot.

Perez said he was already at work for the day when another neighbor called him to let him know there was “a fight going on” at his son’s place, the Houston Chronicle reported.

“I talked to my wife to go see what was going on there, but by the time she got there…the fight was over, the three guys dead and my son wounded,” Perez told the paper. “This was a matter of survival. It was those guys who enter the house, or my son.”

The wounded victim’s mother tied a tourniquet around his leg and administered first aid at the scene.

Gallegos was rushed to Memorial Hermann Hospital in serious condition and was taken into surgery.

“We are sad and dismayed, but thank God we are not the ones losing the life of our son,” Perez told the Houston Chronicle.

Gallegos’ mother said that she did not recognize any of the dead home intruders, and the motive for the attack has not been released.

“They say it may have been a robbery,” neighbor Alberto Martinez told the Houston Chronicle. “I don’t think it was a robbery. It looks more like, I don’t know, revenge or something like that.”

“Those boys had nothing of value in that house,” Martinez added. “It wouldn’t be the house that a thief would choose to steal in this neighborhood.”

The suspects’ vehicle was still parked and running outside Gallegos’ home when police arrived at the scene.

The vehicle was registered to someone who lives in the neighborhood, police said.