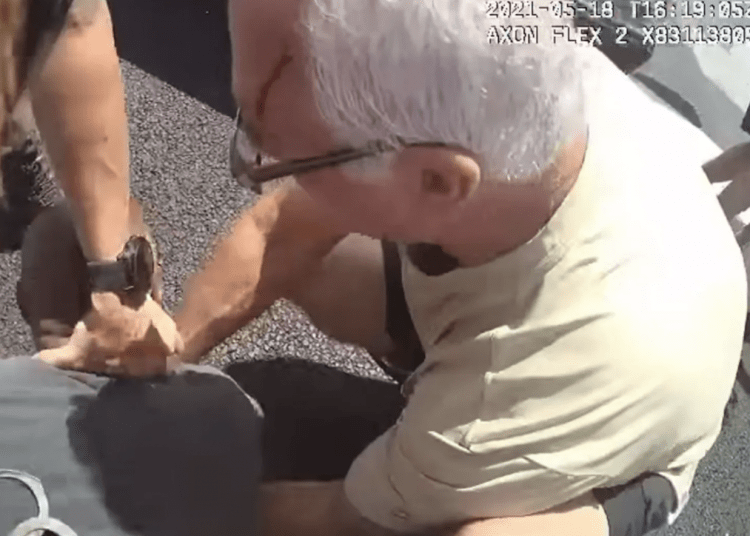 VOLUSIA COUNTY, Fla. — A deputy with the Volusia County Sheriff’s Office received valuable assistance from a pair of Good Samaritans as he was attacked by an erratic man during a confrontation in traffic this week, according to authorities.

Deputy Anthony Zimmer stopped a black Ford F-150 after the vehicle cut across all lanes of traffic and almost struck him, the sheriff’s office said Wednesday.

Frank Padilla Velez, 41, was identified as the driver. Body camera video from the deputy shows the driver got out of his truck and immediately laid down in the road, clickorlando.com reported.

Padilla began acting erratically when Zimmer tried to speak with him, according to the sheriff’s office. As the deputy attempted handcuffing procedures, he became combative. As a result, Zimmer was struck in the head with an elbow by Padilla as he became increasingly non-compliant.

Seeing the confrontation develop, two citizens exited their vehicles and jumped into the fray to help the deputy apprehend Padilla, the sheriff’s office said.

During the struggle, the sheriff’s office said that Padilla thrashed on the ground and tried to bite Zimmerer’s leg. A Taser was deployed but did not have the desired effect, according to authorities.

Additional bodycam footage from deputies who arrived a short time later shows Padilla restrained on the ground. One of the citizens who aided the deputy is seen with a bloody cut on his forehead, Fox reported.

“You hit me, buddy. You hit me,” the citizen tells the combative suspect.

The sheriff’s office said, “Padilla’s dog, which had jumped out of his truck to protect him, was corralled by one of the witnesses and placed safely back in the truck.”

Padilla was booked on charges that included resisting an officer with violence, battery on a law enforcement officer, driving with a suspended license, careless driving, and expired registration.

The Good Samaritans will receive citizen’s awards for their valuable assistance, according to Sheriff Mike Chitwood.

“All my respect and gratitude goes out to these two men who took action when they saw a deputy under attack,” Chitwood said in a statement. “It makes me proud to know that in Volusia County, our residents still have our deputies’ backs.”