The new sentence shaves nearly 8 years from his confinement 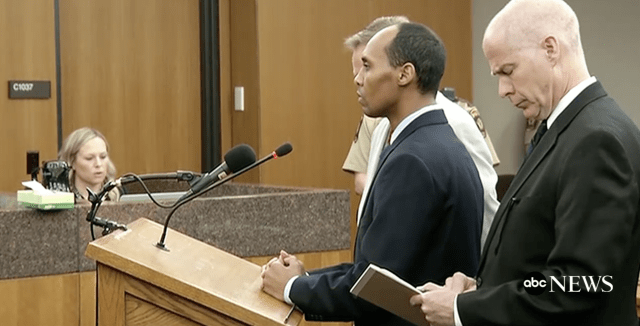 MINNEAPOLIS — Former Minneapolis police officer Mohamed Noor had been serving a 12 ½ year prison sentence on a murder conviction for the on-duty shooting Justine Ruszczyk Damond who called police to report a possible crime. The sentence was vacated by the Minnesota Supreme Court in September, Law Officer reported. Now he’s received a new sentence of 4 ¾ years on Thursday for his manslaughter conviction in the 2017 shooting.

Noor, 36, was resentenced by Judge Kathryn Quaintance on second-degree manslaughter after the state’s Supreme Court set aside his third-degree murder conviction last month. The decision vacated a prison term of 12 ½ years Noor was already serving on the murder count for fatally shooting the Australian woman.

Quaintance, in sentencing Noor to the high end as suggested by state sentencing guidelines, said she wasn’t surprised Noor has been a model prisoner. Nevertheless, the negligent manner in which he discharged his weapon played a role in the judge’s decision, the Star Tribune reported.

Noor was convicted by a jury in 2019 of third-degree murder and second-degree manslaughter for shooting Damond while responding to her 911 call about a possible sexual assault in the alley behind her home. The officer was apparently startled by the woman banging on the trunk of their patrol unit while trying to get their attention. Noor fired a fatal round while sitting in the passenger seat of the police cruiser as the woman approached the driver side of their vehicle.

“These factors of endangering the public make your crime of manslaughter appropriate for a high end sentence,” the judge said.

Noor has served 29 ½ months since he entered prison in May 2019. With credit for time served, he would be scheduled for release after serving two-thirds of his sentence, meaning he must serve another 8 ½ months. He is likely to be released next May, according to the Tribune.

Second-degree manslaughter is punishable by up to 10 years in prison in Minnesota, but state sentencing guidelines recommend a term between about 3 1/3 and 4 3/4 years in prison for defendants with no criminal history, such as Noor. The presumptive term is four years, according to the guidelines.