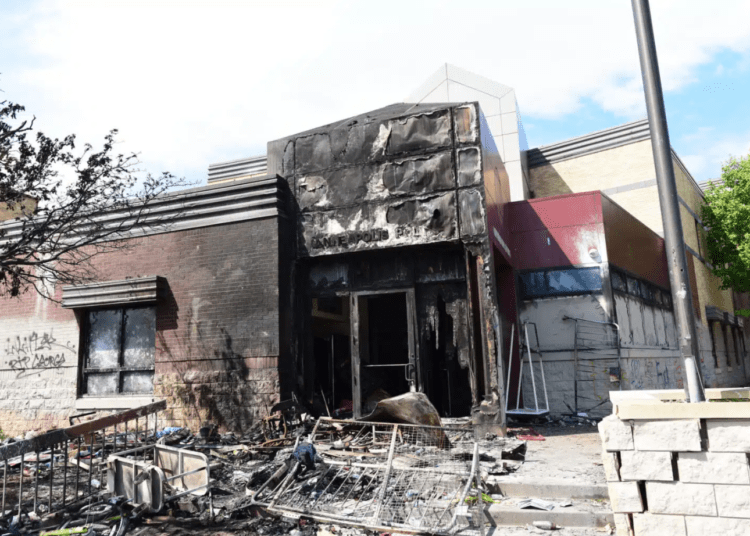 The Minneapolis Police Department's Third Precinct building was destroyed by rioters in the aftermath of George Floyd's death. (Fibonacci Blue/Flickr)

The following is an excerpt from Alpha News reporter Liz Collin’s new bestselling book, “They’re Lying: The Media, the Left, and the Death of George Floyd.”

The day before Arradondo was sworn in as the chief of police in 2017, church and community leaders held a press conference. They declared their support for Arradondo and took the opportunity to criticize the police union and its leadership (namely Bob). One of the more vocal leaders was Pastor McAfee, who founded United for Peace with Sharif Willis in 1992. There was also another coincidence the next day at Arradondo’s swearing-in ceremony. Along with Arradondo’s family, friends, and supporters, McAfee and Sharif were there. Sharif was sitting one row away from Bob. Sharif was likely the mastermind behind the execution of a Minneapolis police officer. He served 23 years in prison for a violent crime and was released just months before the ceremony. And he was welcomed at the milestone ceremony when Arradondo was sworn in as chief of the Minneapolis Police Department.

The 2019 Arrest and Release of Sharif Willis

With all that history in mind, it might be easier to understand how Sharif was arrested in 2019 and almost immediately released for “lack of evidence.” Sources with knowledge of that investigation (who did not want to be identified due to fear of retaliation), explained how Ellison, now the attorney general, stepped in and apparently made the charges against Sharif disappear. This wasn’t a parking ticket. This was a significant arrest based on a lengthy investigation. Sharif was supposed to be reformed for the second time. Although, given the crimes of revenge and retaliation he has been involved in, MPD officers were keeping an eye on him. Sharif was much older now, but apparently not wiser as he seemed to be going back to his old ways. When MPD officers carried out a search warrant where Sharif was residing, they found several rounds of ammunition and other evidence of criminal activity. It’s illegal for ex-cons to have guns or ammunition, so Sharif was arrested and booked. Out of all the suspects arrested in that case, Sharif was the only one released in about the time it takes to read a police report. Supposedly, Freeman, the Hennepin County attorney, felt the evidence wasn’t strong enough. But the fact that Sharif had Keith Ellison’s business card on him when he was arrested might have had something to do with it. Ellison couldn’t keep Sharif out of prison years ago. But as the top cop in Minnesota, Ellison seemed to be making it up to him.

If you’re wondering how this relates to Derek Chauvin’s trial, there are more than a few things to keep in mind. Ellison acted on behalf of various members of the Vice Lords back in the ‘90s, including Sharif Willis. Sharif’s nephew, Monterey, was one of the four gang members arrested for killing officer Jerry Haaf. Ellison escorted another suspect, Pepi McKenzie, back from Chicago to Minneapolis to be taken into custody. Ellison organized protests on behalf of the suspects, believing their rights were being violated by MPD and the criminal justice system back then. So just to be clear, Ellison was supporting members of the Vice Lords gang accused of killing a cop in cold blood. But now, Ellison was the lead prosecutor in a case involving George Floyd — an “unarmed Black man” allegedly murdered by cops. Ellison was no longer a defense attorney representing gang members; he was the attorney general. So, it’s not difficult to imagine how Ellison might have been driven by rivalry, if not revenge. As Cindy Haaf, the daughter of slain officer Jerry Haaf explained, “Ellison never flipped sides” — he always seemed to do more for criminals and not enough for law and order. Ellison’s sense of justice seems to have been formed long ago. In response to protests after the second day of the L.A. riots in 1992, Ellison proclaimed:

“Black people do not live under democracy … You don’t have an obligation to obey a government that considers you to be less than human.”

This might have seemed like a trip down memory lane. But it’s a necessary one. Ellison, Freeman, Willis, and McAfee isn’t the name of a law firm. It’s a list of some of the key players who have been involved with crime in Minneapolis for decades, on one side or another. They were around when Minneapolis was “Murderapolis” due to all the gang violence, and still around for the trial of Derek Chauvin. Their influence and involvement showed up in some strange ways during the trial — even during George Floyd’s funeral.

The funeral began with opening remarks by Pastor McAfee, which were significant. But not so much in a profound way. Pastor McAfee began George Floyd’s funeral by saying:

“On behalf of the pastors and preachers from Minneapolis and St. Paul, the Bloods on the South side, Gangster Disciples and Vice Lords on the North side, Psalm 27.”

The funeral was broadcast live by TV news stations everywhere, including WCCO. But if you ask anybody about how George Floyd’s funeral began with a pastor giving a shout out to street gangs followed by a reading from Psalm 27, they’d probably think you’ve lost your mind. Although that’s exactly what happened. Pastor McAfee called out the Bloods, the Gangster Disciples, and the Vice Lords — the same gang whose members turned to Ellison for support or legal representation back in the day. Sharif Willis was one of them. Given his association with the Vice Lords — one of the gangs mentioned during Floyd’s funeral — it’s insane to think Ellison would even dare to claim that he was impartial. It’s also crazy to think that Ellison and Freeman could cooperate given their twisted history and affiliations. The fact that Freeman and Ellison didn’t recuse themselves from Chauvin’s trial seemed like an ethics violation waiting to happen. But it never did.

The views and opinions expressed in this article are those of the author and do not represent an official position of Alpha News.