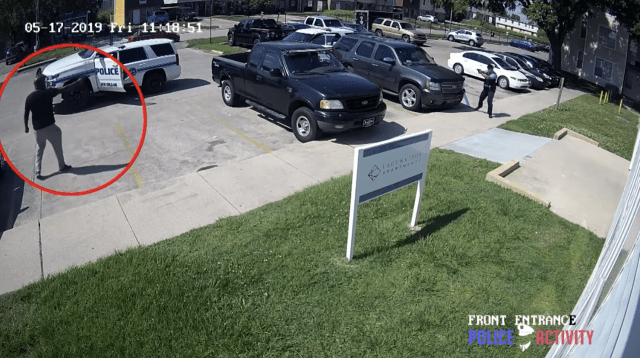 A family member of the man who viewed the footage last week said it shows he was in the midst of a mental episode leading up to and at the time of the fatal encounter, reported nola.com.

Donald Davis, Jr., 40, was fatally shot May 17 the 6800 block of Parc Brittany Boulevard on May 17. NOPD Superintendent Shaun Ferguson said officers were called that morning to investigate a report of an aggravated assault at an apartment complex’s leasing office. Upon their arrival they encountered the armed gunman.

Three responding officers, who have all been on the force somewhere between three to five years, fired their weapons during the encounter, according to NOPD. The officers fired a total of 31 rounds, Ferguson said, and Davis fired once. The officers’ gunfire struck Davis more than once and he was pronounced dead at the scene.

Ferguson said investigators did not learn until meeting with Davis’ family to review the footage that he has a history of diagnosed mental health problems.

Body camera video shows a verbal exchange ahead of the gunfire. Ferguson said Davis yelled something to the effect of, “Shoot me. I dare you.”

Asked if the fatal shooting was the result of a “suicide by cop,” Ferguson said he couldn’t say for sure but that it’s something investigators have considered. Davis’ cousin, Otra Williams, 40, said she has considered that possibility.

One video clip taken from a camera inside the Laguna Creek Apartments’ leasing office showed Davis inside the office with a .45-caliber gun in his hand, hanging at his side. As a result, someone in the leasing office called police, which drew a law enforcement response.

Davis’ relatives said the argument was related to the fact that his apartment key broke off in the unit’s door.

Officers were initially dispatched to a “priority call” of an armed man in the leasing office, police said, but when someone from the leasing office called to say Davis had left, the priority was downgraded. Officers arrived at the leasing office nearly an hour after the initial call to take the report. They were getting back into their vehicles in the parking lot, on their way to drive to Davis’ apartment to interview him, when Davis walked toward them with the same gun.

The video shows Davis pointing his gun at officers as they get back out of their vehicles and yelling at them, then lifting his arm and firing a round. Two officers take cover near a black pickup truck that Davis’ bullet appeared to have struck, then fire their guns toward him until he falls down on his back. The third officer shoots at Davis from the side. Video shows Davis, while on the ground, appears to lift his hand that was still holding the gun. It’s unclear if he intended to shoot again.

The gunfire subsides as Davis lay on his back, knees slightly bent, but still moving slightly, the footage shows. One of the officers approached Davis and used his foot to move the gun that still lay in or near Davis’ hand.

Parker and Williams both said Davis has struggled with mental health problems most of his life. His mother, Charlene Davis, who died in 2011, lived with schizophrenia and bipolar disease, Williams said. She was unable to raise Davis when he was young, so Davis grew up in foster care in different parts of Louisiana.