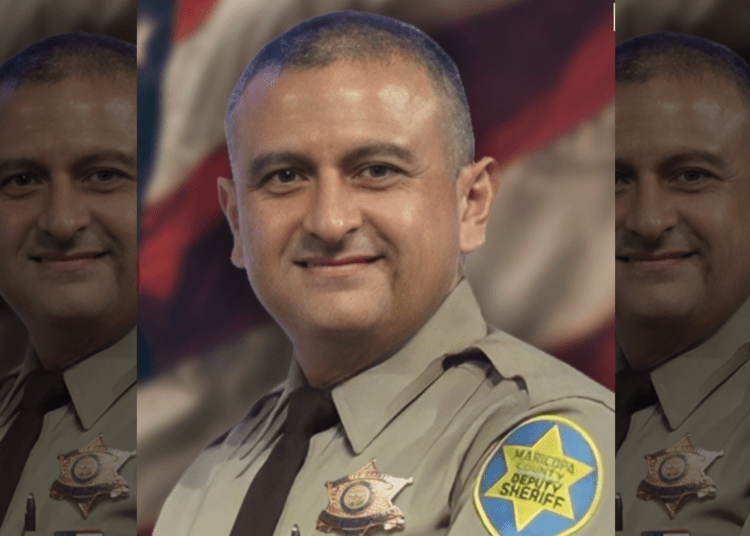 “It is with a heavy heart that I share with you the passing of Deputy Juan “Johnny” Ruiz #S2212. He succumbed to the injuries sustained on Saturday at the hands of a violent predator.

Deputy Ruiz proudly served this community with courage and conviction. His loss is a tragedy for our profession and our community.

We stand strong with great appreciation for his service and pray for his family during this unimaginable sacrifice and loss.

I am committed to pursuing justice for Deputy Ruiz to the fullest extent of the law against the suspect. Nothing less is acceptable.”

PHOENIX — Deputy Juan “Johnny” Ruiz was severely beaten Saturday morning by a suspect who was in custody on warrants. The deputy has been on life support and will not recover from the traumatic injuries. His family is making plans to donate his organs, according to a report.

Maricopa County Sheriff Paul Penzone says the deputy has been on life support since he was beaten by Clinton Robert Hurley, 30, over the weekend. Ruiz, who has been with MCSO for three years, never regained consciousness.

Penzone said the deputy’s family has decided to donate Ruiz’s organs and that Ruiz is undergoing testing to determine viability, azfamily.com reported.

“Over the next few days, he will be making a sacrifice so that others may benefit,” an emotional Penzone said Monday morning.

Hurley was in custody Saturday morning on unspecified arrest warrants after citizens had called regarding a “known nuisance and drug user.”

Ruiz took Hurley into the holding area and removed his handcuffs before placing him into a cell. During the process, Hurley turned on Ruiz and began fighting, according to the sheriff.

Ruiz tried to call for help on his radio several times during the fight, but Hurley beat him unconscious, Penzone said.

Hurley stole Ruiz’ car keys and made his getaway in the deputy’s patrol unit, crashing through a gate at the jail facility in the process.

Sheriff Paul Penzone said the suspect accused of beating a deputy unconscious stole the deputy’s vehicle and rammed the gate at the MCSO building in Avondale. (Source 3TV/CBS 5)

Deputies responded to the holding cell and found Ruiz unconscious. As deputies rushed Ruiz toward a hospital; paramedics met them halfway.

Multiple agencies began searching for the escapee. He was later found at a home in Tonopah. A gun battle ensued and Hurley was wounded during the exchange of gunfire.

A responding MCSO deputy rendering aid to the downed suspect recognized Hurely from tattoos and identified him as the suspect who assaulted Ruiz.

Hurley was taken to an area hospital with serious injuries. He is currently listed in stable condition.