The girl was brought down safely after an hour of dialogue 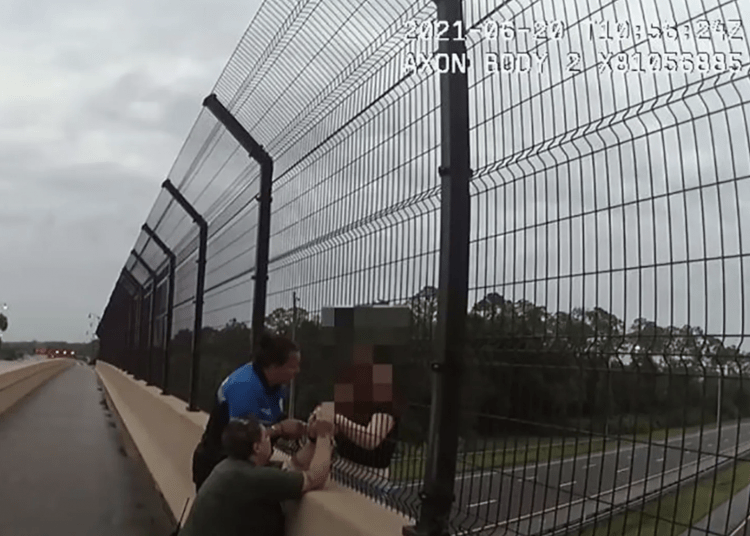 Negotiations lasted about an hour before the teen was safely brought to the ground using a fire engine ladder. (Flagler County Sheriff’s Office)

FLAGLER COUNTY, Fla. — The Flagler County Sheriff’s Office received a call from a concerned father that his 17-year-old daughter was threatening to harm herself before leaving their home on Sunday morning.

The despondent girl was located at the overpass bridge of the Palm Coast Parkway and I-95. She was found holding onto the outside railing and staring down the overpass, “slowly inching her way closer towards the highway,” the sheriff’s office said.

Responding deputies learned the teen did not like males, so they quick summoned a female negotiation team, Fox News reported.

As Deputy Laura Jenkins began communicating with the girl, the teen released the railing. Jenkins quickly reacted and grabbed the girl’s hand through the fencing to prevent her from falling. The deputy managed to handcuff the girl to the rail in the process as the dialogue continued.

After an hour of negotiations, Deputy Crista Rainey and a firefighter rescued the girl using a fire engine ladder and safely brought her to the ground, the sheriff’s office said.

“The quick response and combined efforts of FCSO deputies, Crisis Negotiations, Communications Center, Fire Rescue, and the deputies holding the juvenile’s hand saved a life today,” Flagler County Sheriff Rick Staly said in a written statement. “Their training in de-escalation techniques and being able to talk to someone who’s threatening to take their life is remarkable.

“I commend all the men and women who stepped up for this child’s life today,” the sheriff continued. “Someone’s daughter was saved on Father’s Day, and I hope she receives the help she needs.”

The teen was taken to a mental health care facility for treatment.