At least one officer returned fire, critically wounding the gunman 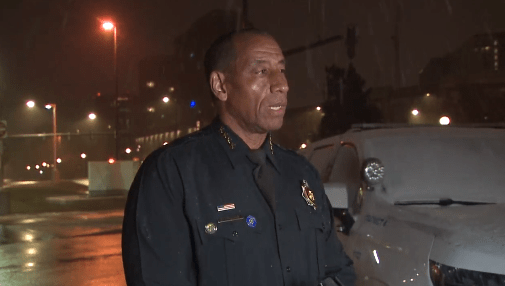 DENVER — A suspect being removed from a police unit at the jail in downtown Denver Monday night shot an officer in the neck before another officer returned fire, shooting the gunman several times, according to the Denver Police Department.

Earlier in the evening the suspect tried to flee from Denver police while driving a reported stolen vehicle. The pursuit took place in southwest Denver, and terminated near Iowa Avenue and Lowell Boulevard where the suspect taken into custody. At the time of his arrest, he was searched and police recovered a handgun and large quantity of narcotics from his person, police said, KDVR reported.

The unidentified male adult suspect was subsequently transported to the jail located at West Colfax Avenue and Delaware Street at about 11 p.m. Inside the sally port area at the Detention Center two officers were removing the suspect — who was handcuffed and seated in the back seat of the the patrol unit — when the shooting occurred.

As the officers removed the suspect, he apparently retrieved a second undiscovered weapon and shot an officer in the neck. Several officers were in the area, and at least one returned fire, striking the gunman multiple times, according to Denver Police Chief Ron Thomas.

Police believe the suspect had retained a concealed weapon while handcuffed inside the back of the police car before opening fire at the Detention Center.

The officer was transported to the hospital with a gunshot wound to the neck. Fortunately, his injuries are not life-threatening, the chief said.

The suspect was taken to the hospital and is listed in critical condition, according to police.

The officer-involved shooting will be investigated per DPD’s shooting protocol with results to be submitted and reviewed by the district attorney’s office.