The city's Black Police Association first raised objectives about the coin, referring to it as a racist depiction. 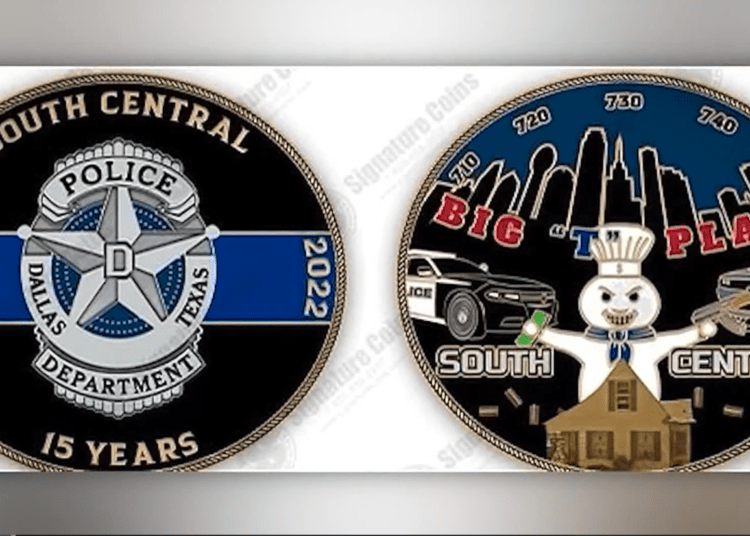 A Dallas police officer created a challenge coin that is being denounced as "racist." (Screenshot NBC DFW)

DALLAS — An officer with the Dallas Police Department has been placed on administrative leave after Chief Eddie Garcia and union officials on Wednesday denounced a “racist” challenge coin created by the individual, saying it negatively depicts a southern Dallas neighborhood, according to a report.

The coin was designed to commemorate the 15-year anniversary of the Dallas Police Department’s South Central patrol division. However, according to leaders, it’s filled with racial stereotypes.

The coin depicts a Pillsbury Dough Boy holding cash and a gun as he stands behind an apparent drug house. The Dough Boy is also wearing a grill, with the coin featuring a Dallas patrol unit on one side and a purple car with large rims on the other. The coin has “Big ‘T’ Plaza” written across the top. The plaza is a shopping center in South Oak Cliff, WFAA reported.

Garcia referred to the coin’s artistry as “insensitive and racially offensive” in a statement.

“I know that this coin, and what it depicts, does not represent the beliefs or ideals of the men and women of the Dallas Police Department as a whole,” Garcia noted. “We will not tolerate this type of conduct.”

Once the coin became widely spread on social media, the unnamed officer’s chain of command was notified and the individual was placed on administrative leave while internal affairs investigates the controversy.

Garcia said police leadership is dealing with the issue “swiftly and sharply as this is not the standard for our department moving forward.”

President of the Dallas Police Association, Mike Mata, called the coin “in very poor taste” and that it “had no business being on the DPA members page,” where it was posted this week.

Mata “immediately” deleted the coin post from the page once he became aware of it, according to WFAA.

“I understand it’s my responsibility to maintain the moral compass of the DPA members page,” Mata said. “In saying, I want to apologize to any person who was hurt or offended by the post and I promise to be more diligent in my duties to ensure that this organization and the media sites within it respect all members.”

The city’s Black Police Association initially raised objectives about the coin Wednesday, referring to it as a racist depiction of the area it represents.

In response, Garcia held a news conference with the association Wednesday afternoon to address the issue.