The driver of the striking vehicle was arrested for DUI 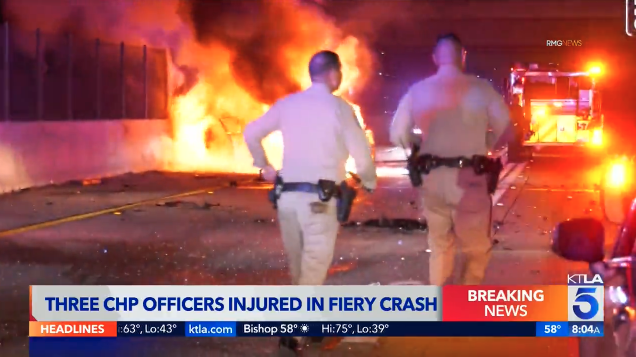 DOWNEY, Calif. – Three police officers with the California Highway Patrol were injured in a fiery freeway crash Thursday morning. The collision that prompted an hourslong closure took place on the 105 Freeway in Downey.

The dramatic wreck occurred about 1:30 a.m. in the eastbound lanes near Lakewood Boulevard, KTLA reported.

CHP Officer Kevin Tao said the agency was working another collision when the officers were struck by an SUV.

According to a witness, the CHP unit was conducting a lane closure on the freeway when a speeding vehicle slammed into it going approximately 90 to 95 mph.

“They flew right past me,” Robert Martinez said. “The driver applied no brakes and went straight into the CHP car.”

During the massive wreck, the civilian vehicle flipped over after it struck the officers’ vehicle, Martinez said.

The speed of the striking vehicle will have to be calculated by an accident reconstructionist.

Local news video from the scene showed the CHP car fully engulfed in flames shortly after the collision. 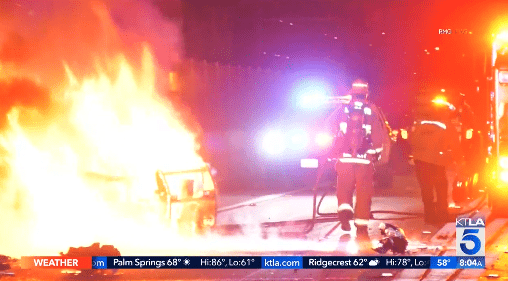 Tao confirmed that two officers were inside the police unit and a third was standing outside at the time of the crash.

Tao said the officer who was standing outside the vehicle was transported to a nearby hospital with unspecified serious injuries, KTLA reported.

The two officers inside the patrol unit were also transported to a local hospital. Their injuries are described as moderate, Tao said.

The unnamed female driver of the SUV was arrested on suspicion of DUI following the crash, Tao said.

The driver was the sole occupant in the SUV.

The eastbound side of the 105 Freeway remained closed for hours due to the investigation.