However, two black women were shot and killed by law enforcement in 2020 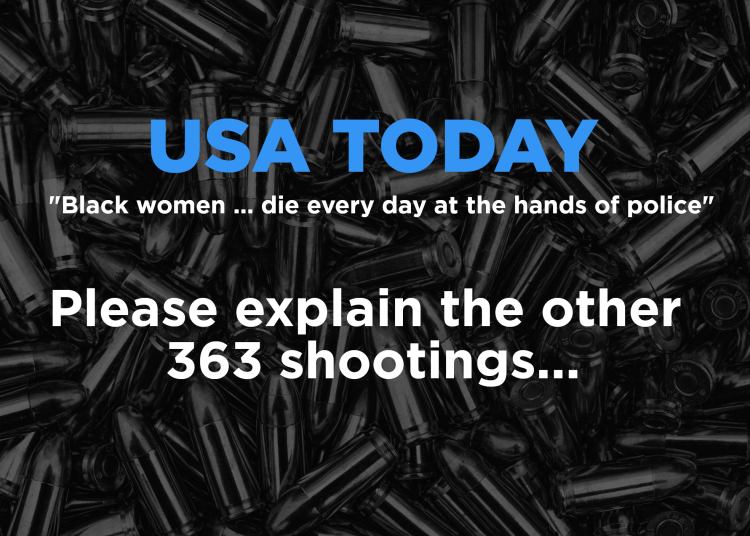 The outrageous claims of a recent article published by USA Today should offend anyone who believes in facts and civility. But even worse, these extraordinary lies are becoming all too commonplace in mainstream news and social media. And nothing demonstrates the agenda-pushing deception than the blatantly false article published by USA Today titled “Black women like Breonna Taylor die every day at the hands of police. It’s time we said their names.”

There’s just a slight problem with that headline: last year, two black women were shot and killed by the police.

But why should USA Today and other mainstream media outlets let that inconvenient little fact get in the way of front-page headlines? Besides, according to their own fabricated estimation, they were off by only 363 homicides—or more than 18,000% statistically speaking.

Yes, only two black women—”like Breonna Taylor”—were shot and killed by police in 2020. We’re hoping that USA Today will actually do something truthful and account for the other 363. But in the meantime, it may be worth noting that in each of the two shootings that actually did occur, both black women were involved in shooting at police officers.

In 2020, Phoenix Police shot and killed Helen Jones. Jones told officers she was unarmed. But she refused to show her right-side hip area and appeared to be hiding a weapon. She repeatedly refused to comply with officers—before she pointed a gun at them. There is no disputing her actions: it was all caught on body camera footage, and Jones clearly pointed a gun at police.

The second shooting in 2020 was Breonna Taylor. Taylor was a victim of a tragedy. But she was also a victim of poor choices, as shown in the pictures of her standing beside her gun-toting boyfriend—as she did when her boyfriend stood in a hallway shooting at police officers.

If USA Today and others want America to believe that police shoot and kill innocent black women “every day,” then they have a lot of explaining to do. And America should absolutely demand an explanation for such divisive, unfounded nonsense—especially when it disrespects the true history of suffering that USA Today claims it somehow understands, beyond its obviously lame attempt at virtue signaling.

More importantly, aside from publishing utter falsehoods and fabrications, USA Today and other mainstream make-believe media outlets are ignoring an awful lot of important information that could actually prevent police shootings and the deaths of both cops and citizens. But that would require USA Today and others to start telling the truth.

And before anyone tries to argue that the two unfortunate deaths of black women in 2020 were an anomaly, there were six black women who were shot and killed by law enforcement in 2019. And just to be clear, if police “shoot and kill” black women “every day” as the USA Today claims, then in the past two years, 730 black women should have been shot and killed. However, there were eight. So, USA Today only needs to account for the other 99% of shootings and killings that reportedly happened in 2019 and 2020.

But perhaps more importantly, USA Today is flat out lying about the circumstances and the completely shameful comparison to enslaved women. The women who were shot and killed by law enforcement were attacking cops with weapons—they were not innocent victims.

And all of them refused to comply with law enforcement officers who were pleading with them to stop. That is exactly what Nashville Officer Josh Baker was doing when he shot a black woman a few days ago.

Officer Baker stopped a car that was registered to a man with six outstanding warrants related to drug charges. Baker discovered that the suspect wasn’t in the car, but 31-year-old Nika Nicole Holbert was.

Officer Baker couldn’t have been more polite and professional. He tried to explain to Holbert why he stopped her. And even when she repeatedly refused commands, he remained calm and poised. As she kept digging through her purse, Officer Baker observed what appeared to be marijuana and a white powdery substance.

Holbert ran. Officer Baker deployed his Taser to no avail. Holbert then got back in her car, pulled a gun and shot Officer Baker, who remains hospitalized.

Holbert shot a police officer and drove off, but later crashed her car and was pronounced dead later that day.

For some strange reason, the story of Holbert—a black woman who shot a police officer—did not make the headlines in USA Today, or many other media outlets. But this would require reporting facts and real cirumstances—not the ever-so-virtuous nonsense they are publishing instead.

This make-believe ‘journalism’ is not only twisted, it’s sickening.

Yet perhaps more importantly, aside lying to America, USA Today seems all too eager to publish myths that divide America—and are perpetuating the very kind of racially divided enslavement they claim to oppose.

To be clear, America is being divided by the mainstream media—according to so-called news that doesn’t even exist. That is, unless USA Today and other media outlets care to evidence and explain the other 363 murders of black women by police that supposedly occurred in 2020.

Indeed, as this horrific fabrication of lies prove, mainstream news and social media are the enemy of civility—and the enemy of any sense of justice, law, and order we could ever hope to achieve.

So while there are plenty of demands being made these days, the latest fabrication from USA Today shows we also need to demand the facts and the truth.