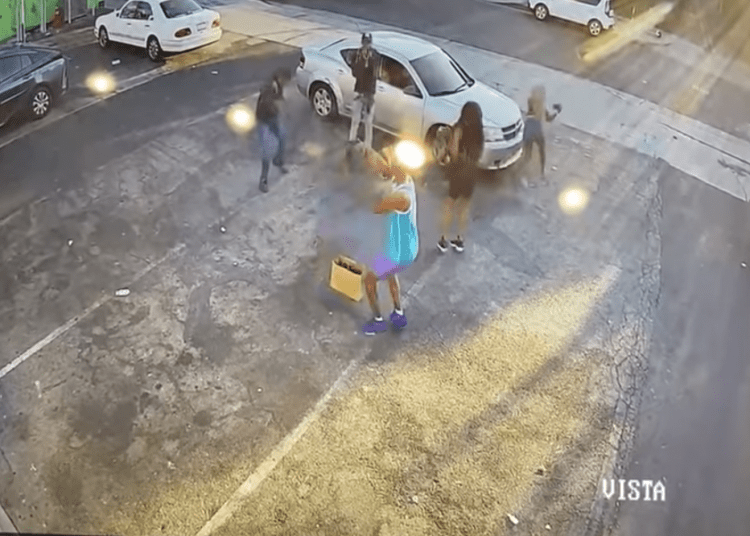 An armed robbery is foiled when the victim fires at two suspects. (YouTube)

LOS ANGELES — A man armed with a handgun defended himself during an attempted armed robbery in Los Angeles, and left two suspects with gunshot wounds to their legs, according to the Los Angeles Police Department.

“Words were apparently exchanged, and the victim ultimately produces a handgun, apparently to defend himself and others in his group from the would-be robbery suspects. The victim fired his weapon towards the suspects and then all parties immediately fled the location,” LAPD said in a news release Tuesday.

The crime occurred on Monday at 7:10 p.m. when two suspects got out of an idling Dodge Avenger near Melrose Avenue and Vista Street, Fox News reported.

Video footage shows the silver sedan backing near three people who appear to be conversing in a parking area. Both passenger doors pop open and two suspects exit and confront the man and two women. Each suspect appears to be brandishing a firearm.

The perpetrators’ plan immediately backfired as the male victim, who was reportedly the target of the robbery, produced his own handgun and fired at the suspects sending them fleeing. The suspect vehicle, driven by a third party, also fled without the compatriots as the victim opened fire.

LAPD arrested and identified the two wounded suspects as Nicholas Brown and Markeil Hayes, both of Los Angeles.

Brown sustained a gunshot to the upper left thigh while Hayes was shot in the right calf. Police are still searching for the driver of the getaway car, which was described as a silver Dodge Avenger.

Both Brown and Hayes are currently on parole. They were booked for attempted robbery.

“The Los Angeles Police Department is aggressively addressing a rise in violent crime in the Melrose area over the past year and is pursuing all leads involved in this and other crimes,” police said in the press release.

Homicides in Los Angeles are up 25% this year, with South Los Angeles seeing a 50% increase in homicides, KTLA reported.

Violent crimes have also been increasing in cities across the nation as civil unrest spread and liberal politicians have fought to defund police following the death of George Floyd.