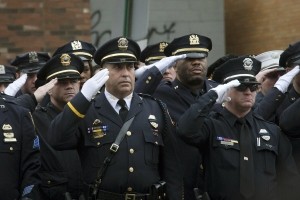 byLaw Officer
Share and speak up for justice, law & order...
I have been serving in law enforcement for more than 36 years and my career is fast coming to an end. I am sad to say that I will likely be leaving this job very angry over the present state of affairs in America regarding an attitude that is developing concerning law enforcement in our country. I am overly troubled by the recent ambush attack and murders of police officers Rafael Ramos and Wenjian Liu in New York City, Alyn Beck and Igor Soldo in Las Vegas and Pennsylvania state trooper Bryon Dickson.
Since I began my police career I can't remember the level of anti-police sentiments being this high. Protestors recently were chanting in the Murray Hill neighborhood of New York City "What do we want? Dead cops. When do we want them? Now!" Really? Is that what our society in general wants? The media is hammering us with stories every night about anti-police protests across the country. It is not a good time to be serving in law enforcement.
Who is responsible for this behavior? Politicians, religious leaders and prominent society members have made inflammatory statements regarding race relations and the police. Al Sharpton, Charlie Rangel and President Obama all have issued statements that may have been perceived to be responsible for fanning the flames of antagonism toward the law enforcement community. This appears to be some attempt at creating an "us vs. them" mentality of police vs. the citizenry. I don't know any police officer who took this job with that mentality. Maybe the mentality was good guys vs. bad guys. Most officers came on the job with the idea of serving the public, keeping citizens safe and putting the "bad guy" where he belongs: in jail.
Police officers are used to being in control of dangerous situations. They are usually highly trained to handle any type of situation. However, officers typically encounter suspects or offenders who have no respect for authority, let alone police officers. The suspect is determined to make the police/suspect encounter as caustic as it can possibly be. Most police officers will easily recall a story about some person they encountered for a minor law violation who acted in such an unreasonable manner that the officer was forced to arrest that person. The officer will tell you that when he originally encountered that person his purpose was simply to investigate the situation, warn the person about their activity, document the stop and send the offender on their way with a discretionary warning. Recently the high profile cases in Ferguson, Mo., and New York City are examples of defiance exhibited toward the police officers who encountered these suspects. Maybe if these law breakers, who eventually died at the hands of police officers, simply followed the verbal commands of the involved officers, they would still be alive today. When did it become OK to defy law officers because you simply don't like to follow the morals, norms and values of a decent society? You have no right to resist a lawful arrest of a police officer. Where did respect for authority go? Where did common sense flee to? Common sense apparently is not so common anymore.

New York-based reverend and activist Al Sharpton stated at the funeral of Michael Brown, “The policies of this country cannot go unchallenged. We cannot have aggressive policing of low-level crimes and can’t deal with the higher level. Something’s strange that you can get all these guns into the hood, but you go around chasing people with loosie (singly purchased) cigarettes and walking in the streets.”(1)  I don’t remember when Al Sharpton became an expert on how professional police officers should conduct themselves when policing. Police officers are charged with enforcing all laws. It is true that officers utilize discretion on a daily basis and often overlook minor, nuisance-type crimes. However, if a citizen complains to the police and wants an offender locked up for selling "loosies," then the officer should take arrest action. That fulfills the whole concept of doing what the community you are serving desires.

Share and speak up for justice, law & order...
Tags: Leadership