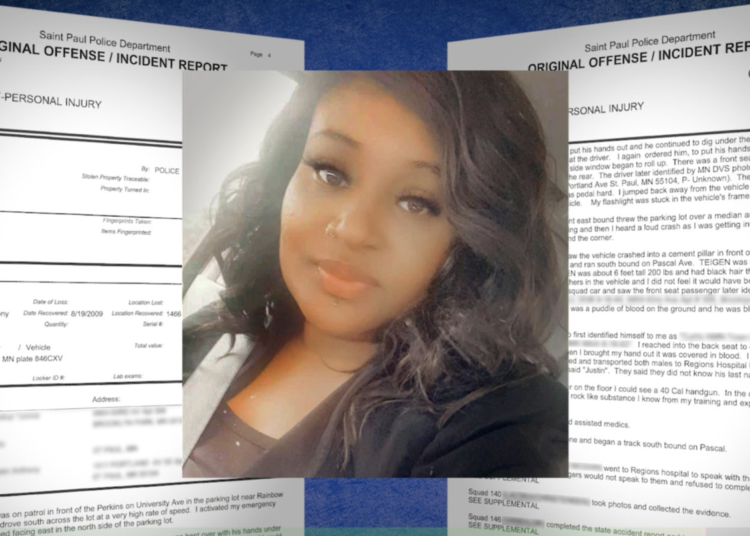 Toshira Garraway, pictured above, spoke with Liz Collin over the phone about the case. (Alpha News)

“Justin Teigen was brutally beat to death by the St. Paul police here in the state of Minnesota,” Toshira Garraway said at one press conference.

Garraway has been telling her story for years, whether to Minnesota lawmakers or local and national media cameras, seemingly unchecked at every setting.

“They caught him. They beat him to death. They threw him in the garbage. They frame the whole story,” she said during another local media interview.

But an Alpha News investigation revealed that the story Toshira Garraway has been telling is not true.

Her fiancé, Justin Teigen’s name has made it as far as the State Capitol this session with a potential law that would change the statute of limitations against Minnesota police officers, all based on a lie, according to the evidence and those who know the case well.

Mark Ross is a St. Paul police officer and president of the St. Paul Police Federation.

“Quite frankly, it saddens me that people in these high-ranking positions won’t come out and call it out for what it is,” Ross added.

So, what really happened to Justin Teigen 12 years ago?

After sorting through surveillance video, documents, and five different agencies’ findings, officials have concluded there is nothing to support the serious allegations Garraway has been leveling against the St. Paul Police Department.

“Mr. Teigen’s death was unfortunate and sad, but it was not due to police misconduct,” St. Paul Police Chief Todd Axtell told Alpha News.

The case begins just a few minutes before 3 a.m. on Aug. 19, 2009. An officer stops a Dodge Charger driving through what was once a parking lot near Perkins on University Avenue. The report states the driver is driving at a “high rate of speed.” According to the report, the officer walks up to the vehicle to see “three males in the car.”

The driver would later be identified as Justin Teigen. According to the same report, he refuses to show his hands. Instead, Teigen steps on the gas as the officer jumps back, “afraid he’d be run over.”

The car doesn’t get far. Surveillance video shows Teigen as he crashes into a cement pillar at a strip mall just blocks away.

Nine seconds later, you see a figure get out of the car and run from the scene.

Another camera captures that figure, Teigen, running down the sidewalk.

Seconds later, the same officer who first tried to pull him over arrives.

He stays with the two passengers who were left behind, bleeding.

The officer also finds a handgun on the floor of the driver’s seat and a bag of cocaine in the car.

A few minutes later, more cops pull up, including a K9 officer to look for Teigen.

A total of 21 police officers are part of the search that night as a thunderstorm moves in.

Video surveillance from a nearby Walmart will later help to solve the mystery of Teigen’s whereabouts.

He climbs into a recycling bin in the distance.

Officers walk past it a few different times.

Still, nothing happens to the bin as the video runs continuously.

An hour and 20 minutes after the crash and after police clear the scene, a trash truck pulls up, unknowingly picking up the bin where Teigen is hiding.

It’s nine o’clock the next morning, when workers at a recycling plant in Inver Grove Heights find Teigen’s lifeless body.

According to the medical examiner, who also reviewed reports and video, Teigen died of “mechanical asphyxia” and had injuries “consistent with a motor vehicle crash.”

On two different occasions the Ramsey County Attorney’s Office weighed in. The director of the criminal division, Richard Dusterhoft, wrote as recently as 2019: “I did not see then, and I do not see now, any basis to believe a homicide occurred or should be prosecuted.”

Another letter went on to say, “The investigation is considered completed and closed.”

“I certainly understand the pain and emotion felt by those who knew and loved Mr. Teigen,” Chief Axtell said.

“The fact is if different choices had been made on that day in 2009, if Mr. Teigen hadn’t fled from police officers, if he hadn’t crashed, left his friends injured in a car, and ran away from the scene, if he hadn’t hid in a dumpster for hours ultimately being crushed by a garbage truck, he may still be alive today,” he said.

Republican Rep. Brian Johnson has been listening in as Garraway advocates for the Justin Teigen Law at the State Capitol.

“It’s a slap in the face to law enforcement,” he said of the bill.

The bill would eliminate the statute of limitations for filing civil lawsuits against police in wrongful death cases.

“When we keep pushing misinformation here at the Legislature, we’re not doing the citizens the proper way. We lose our credibility. It’s so important the testifiers you’re using to promote something in a bill are true and accurate otherwise it is an injustice to the citizens of Minnesota,” Johnson said.

“It’s up to the chair and committee legislative administrator to make sure that the people they bring to testify are correct,” he added.

Alpha News reached out to the people in those positions to ask what happened here. DFL Rep. Carlos Mariani of St. Paul and Criminal Justice Reform Committee Administrator Jamael Lundy did not reply in time for our deadline.

“Commissioner of Public Safety John Mark Harrington was chief of police at the time in St. Paul. He knows that what she’s saying is untrue. He’s been present while she says things that are untrue,” Ross said.

Ross pointed out that in addition to Commissioner Harrington, Paul Schnell, who served as the St. Paul Police Department’s PIO back then, now serves as Minnesota’s commissioner of corrections.

Videos from the Legislature show they have both been present as Garraway’s story was recited.

Again, Alpha News reached out to ask why they haven’t corrected the record.

“What it does is it diminishes the relationship we’re trying to build with the community, and it breeds distrust with police and it works against everything we’re trying to accomplish right now,” Ross said.

As for Toshira Garraway, when she called us back, we tried to explain the lack of evidence to support her claims and we offered to review the case files with her. Garraway would only agree to do so if the medical examiner and five different officers were present. Some have since retired from the force.

“Murder is murder and right is right and wrong is wrong. These people are inhumane. It is wrong what they’ve done. I hope they can live with themselves,” Garraway said.

“I understand you’re just doing your job, but you need to understand the pain and the torment that they’ve caused my son. And they go on with their lives and go home to their families and it’s just not right,” she added.

After failing to file an annual renewal as required by state law, the group was dissolved by the Secretary of State’s Office in January.