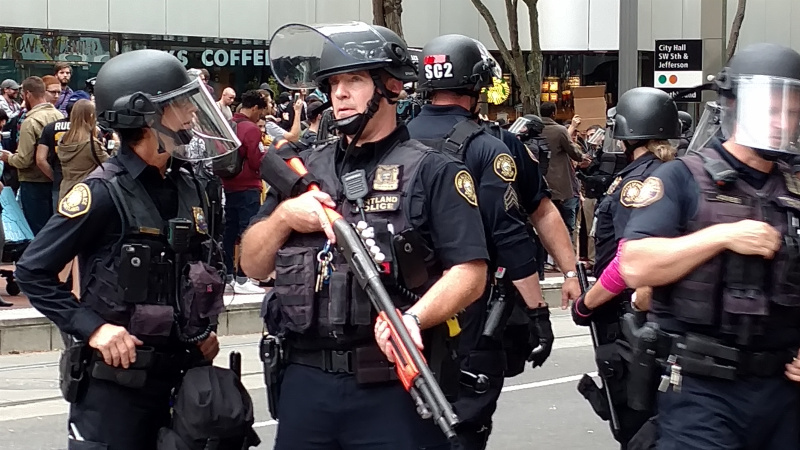 The ACLU of Oregon says it’s time for Portland police to stop showing up in riot gear in response to anti-Trump protests.

“When police show up in riot gear, it has the effect of escalating the situation,” said ACLU of Oregon spokeswoman Sarah Armstrong. “We think police policies should aim for de-escalation.”

Portland police arrested 13 people Monday during a “Not My President” rally in front of the Federal Building on Southwest Third and Columbia Street. Armstrong said officers who showed up in riot gear, as they have for all of the anti-Trump protests, used riot control tactics in making the arrests.

“Portland has a long history of civil disobedience,” said Armstrong. “What seems to be different is the swiftness and violence of the police response.”

Many observers have noticed a change in the tolerance level of police for protesters blocking streets under Mayor Ted Wheeler. Protests taking place in 2016, before Wheeler took office, included hours of blocked streets.

In a statement released Tuesday, Wheeler said he and the police chief will meet with members of the community to discuss how to best relieve tensions between protesters and police.

Several Portlanders have complained that officers pushed their way into a crowd of peaceful protesters standing on the sidewalk to make the arrests Monday.

Portland Police Bureau spokesman Sgt. Pete Simpson said that once officers decide to arrest someone, it’s too late to retreat to the sidewalk.

“The sidewalk is not ‘home base,’” said Simpson.

As for the request by the ACLU that officers refrain from wearing riot gear to protest, Simpson said the gear is for their own protection. During an Inauguration Day protest on Jan. 20, protesters threw eggs, rocks, bottles and fireworks at officers.