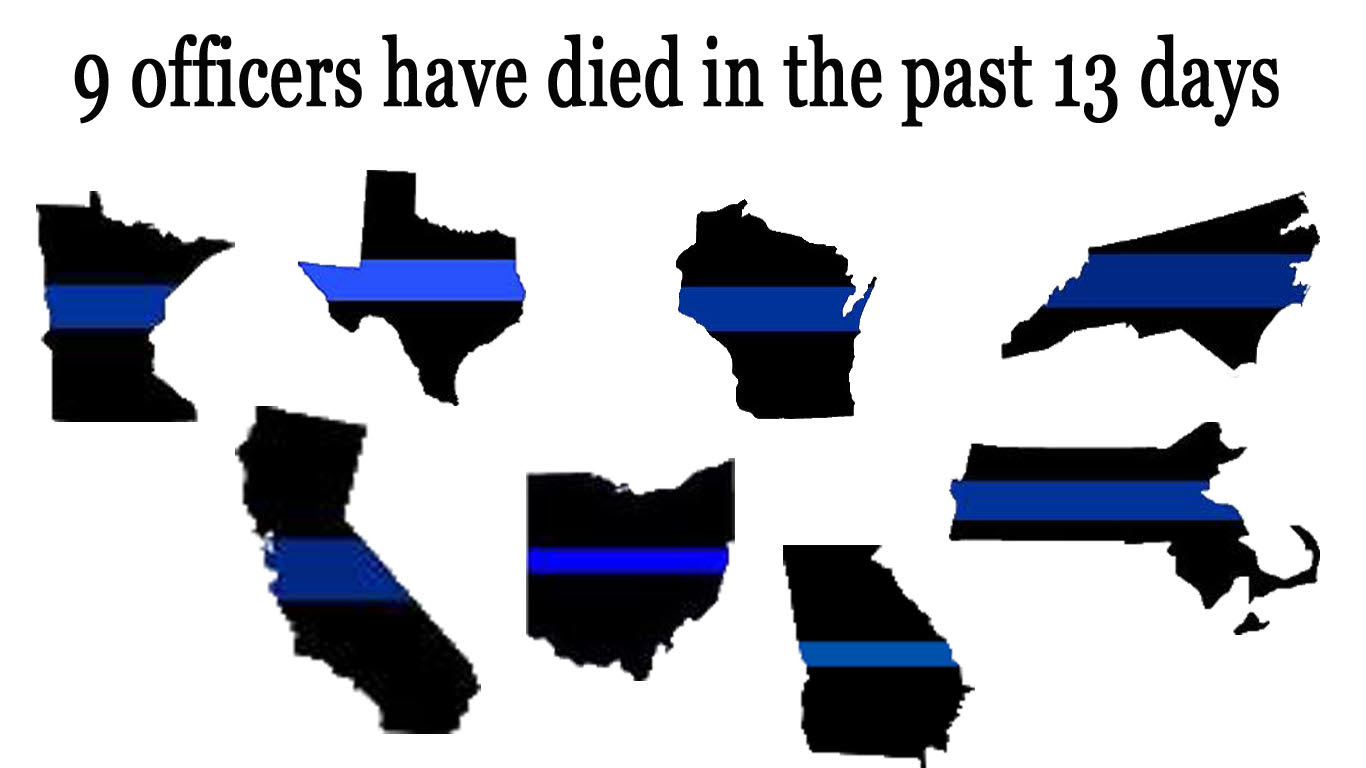 Editor’s Note:  In the first few hours of posting this article, Karen was notified of two additional suicides in this 13 day time frame. Unfortunately, the total is now “11 police officers in 13 days.”  This highlights the importance of this article and our continued work on this tragic issue.

13 days, 9 officers dead. Their pictures aren’t going viral, the internet is not outraged, and it’s not newsworthy. None of the families will receive benefits and many will not get a funeral with honors. Their deaths will go unnoticed by the general public. Why? Because they weren’t killed by others. They were killed by the demons in their heads and society does not see them.

I see them, but I don’t see all of them. Too many are still hidden, unreported, and afraid. Afraid to acknowledge that their loves ones completed suicide. Why? Because a Facebook LEO support page recently called an 18 year veteran of the force a coward for taking his life. Because a department refuses to give a 16 year veteran a funeral with honors. Because we say “It is not how these officers died that made them heroes, it is how they lived,” and we lie as we say it.

If how they lived mattered, we would recognize their lives, their service and when the job contributed to their deaths.

Do you see it yet?

One of our biggest problems is understanding depression. Too many believe that it can be controlled and that those that completed suicide could have stopped. It’s simply not that easy.  There are biological factors that influence the mind and often it is indeed beyond their control. When an individual is under the influence of drugs or alcohol, they say and do things they may not normally do; their perception of reality is altered. Depression and post-traumatic stress have the same effect on a mind; people will say and do things they would not normally do and their perception of reality changes. Too often this leads to self-harm.

Start the discussion and let’s make a change. Law Officer is working with 1Alliance and Wounded Officers Initiative to build HonorThem, an officer down website for suicides. We’ll recognize their service, provide resources and bring this problem to the forefront where it belongs. Help us – record suicides, tell us about your PTSI, let us know what resources have helped you throughout your career and help us raise money for training and grief counseling. Most importantly, get help.

13 days, 9 officers. Some in their uniforms, patrols cars and stations. Others at home. Make their deaths count. Don’t sweep them under the rug, lie about them or ignore them. Step forward and be courageous, get help, get your buddy help, provide your department with a culture that won’t penalize them if they need to talk to someone. Departments like the New York City Police Department and the Indianapolis Metropolitan Police Department have policies in place to protect their officers when they need help. We all need to be more like them if we are to save the next 9 officers who are feeling suicidal.