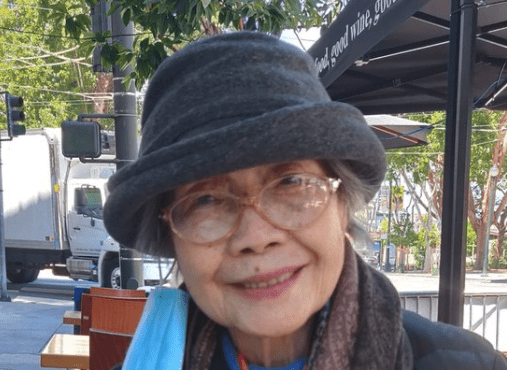 Anh Taylor was stabbed in broad daylight outside of her apartment on Wednesday. (Twitter)

SFPD dispatched units to the report of a stabbing in the 800 block of Post Street, Wednesday about 10:15 a.m. Responding officers found Anh Taylor, 94, in front of her apartment with multiple stabs wounds. Paramedics responded to the scene and transported the victim to a nearby hospital. Officers located a knife at the crime scene, NBC Bay Area reported.

The suspect has been identified as Daniel Cauich, 35, who was taken into custody about two hours after the attack, Washington Examiner reported.

Cauich was arrested five separate times last year on burglary charges and was also arrested in 2016 in connection to a homicide, according to NBC. He was reportedly wearing an ankle monitor when he was taken into custody on Wednesday.

This is 94 year old Anh Taylor-attacked and stabbed in front of San Francisco building where she’s lived for 45 years. She’s recovering at a hospital tonight in stable. Her attacker, with a long criminal history, was wearing an ankle monitor. ⁦@nbcbayarea⁩ pic.twitter.com/VmOlkoVsOC

“When I ran over, I saw blood gushing all over. I said, ‘what happened?’ She said ‘I don’t know, he stabbed me,'” said a woman identified as Jasmine.

Police have not said if race played a role in the attack.

“I’m very angry,” said Josephine Zhao of the Chinese American Democratic Club. “What do we owe you San Francisco? What’s wrong with our city that criminals are treated better than Asian seniors? And who’s not doing their job?”

Taylor’s neighbor, Miranda Benvenuti was horrified by the crime.

“Devastating, honestly,” Benvenuti, said, according to NBC. “I was so devastated to find out it was her, I just started bawling my eyes out.”

Cauich was booked for attempted murder, battery with serious injury, elder abuse, committing a felony while on bail, great bodily injury enhancement, and probation violation. He is schedule to appear in court next Tuesday, and is being held without bond.