What’s In Your SUV? 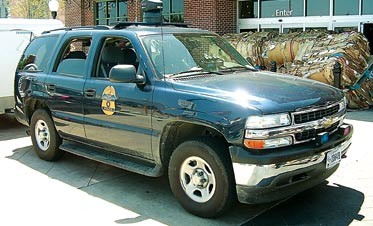 [et_pb_section admin_label=”section”]
[et_pb_row admin_label=”row”]
[et_pb_column type=”4_4″]
[et_pb_text admin_label=”Text”]
Recently, a friend and fellow officer wrote me the following e-mail: Jeff, Our department is setting up three SUVs as quick-response vehicles. All our vehicles are already equipped with interior-mount AR-15s, and we have MDTs with Internet connectivity. Any ideas on what to equip them with other than the following?
—Joe

I spent a lot time deciding what to put in my SUV. I run a Ford Excursion as a quick-response and command vehicle. Joe has listed a lot of usable gear for their response SUVs. I have many of the same items, and a few others that I’ll list below. But whatever you decide on, test it. Make sure the gear works and is sustainable in heat and cold storage.

OK, first I think you should consider including one or more roll-out/grab bags for those immediate-deployment scenes where you must leave the SUV. This bag must remain light enough to carry or sling, and it might contain:

In addition to the roll-out/grab bag, I would add the following to a quick-response or command SUV:

1. AC power inverters: a small inverter (100 watt) and a larger inverter (400-plus watts) to allow use of 110-V applications, such as single or rack battery chargers for portable radios. Every patrol car should have a 100-watt inverter that plugs into the cigarette lighter so you can place a 110-V radio battery desk charger on the vehicle s front seat and charge the extra battery while driving. This keeps the officer independent and in communication;

3. A 5-percent bleach/water solution in a spray bottle for decon;

4. A supply of Israeli battle dressings with surgical gloves in a plastic baggie. Tape one on each ammo bandolier and store the rest in a container;

6. Extra cuffs, spray-painted bright red to reduce the chance they will disappear;

7. 4’x6′ or 6’x8′ blue poly tarps. Folded up, these do not take up much room, and I carry several. You can use them to create a rain barrier over your SUV s tailgate, curtains for privacy, a place to set items on or to cover wounded or DOA;

10. A tire-repair kit, floor jack, lug-nut X tool and a small air compressor that runs off 12-V. Floor jacks are now small, lightweight and work far better than what comes standard with your vehicle. Include a 2″x12″ piece of wood to use as a base on uneven or soft surfaces;

11. A portable power supply and jumper cables for jumping auto batteries. The power supply should also feature 12-V plug-ins so you can power cell phones, etc.;

13. A roll of 1,500 lb. web strapping to make rescue/drag straps and Swiss seats for rappelling;

Note: I carry items 12 and 13 in an Alice Pack with carabiners and other associated items.

15. Digital camera(s) with a 2 GB memory card, extra rechargeable batteries with a battery charger that plugs into a 100-watt inverter, and a download cable;

16. A digital video recorder that can shoot still photos, too;

Note: You can use items 15 and 16 to get intel to EOC and other command units via the Internet.

17. Extra sets of maps of your town stored in a Tupperware container to give to incoming mutual-aid/assist units. Premark them with planned traffic-person control points and other manned positions. This will eliminate the need to give verbal directions, saving critical response time;

18. Portable lighting for a command area to the rear of your SUV. Use it under your tarp or barrier;

19. Air mattresses or ground pads, and a sleeping bag or poncho liner;

I also store a lot of protective clothing in my SUV, including sets of those inexpensive spring-held ear warmers (it gets real cold here), sets of gloves, an extra set of Rocky boots and BDUs. I store them in either plastic containers or milk crates.

In two recent events, one officer-involved shooting (OIS) and one pursuit of armed robbers, we needed that warm gear. In the pursuit of two armed robbers, my officers and I were on the scene of the bailout from the escape vehicle and locked down a perimeter with other officers. This operation went on for the better part of two hours in near 0-degree F weather. I handed out gloves and head covers to K-9 officers who bailed out with nothing other than their shirts and vests. They did a great job catching the bad guys. The point: Many were in real danger of frostbite had it gone on much longer, as was the case with the OIS.

All said, this is lots of gear that takes lots of space. One solution: Outfit a small trailer with the bulk of the non-critical response gear. Back up to the trailer hitch and drive off. Fire responders have been doing this for years.

I categorize the above listed items as must-have, better-have and like-to-have. Water/hydration in hot weather is critical. Clothing protection in cold weather is the same. You must decide what makes the cut when you load out. The police response vehicle is the rolling storage locker. With it properly outfitted, we can be self-sustaining for several days or more, which is often the most dangerous and difficult time.

The bottom line: We can unload, take off or leave behind what we bring, but not what we don t.