Mall of America security ordered a man to take off a “Jesus Saves” shirt, according to videos on social media. 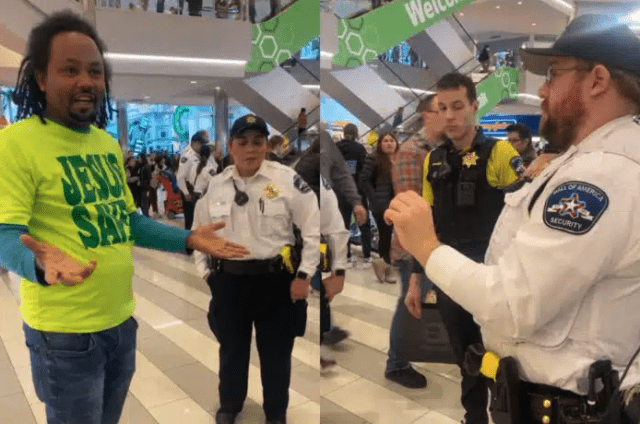 A man wearing a "Jesus Saves" shirt was asked to leave the Mall of America, according to videos on social media.

BLOOMINGTON, Minn. – A man wearing a “Jesus Saves” t-shirt was ordered by security to remove his shirt or leave the Mall of America last weekend, according to videos published on social media.

Some comments online have suggested that the man was eventually allowed to remain in the mall with his shirt on, but the Mall of America refused to provide any context or explanation when contacted by Alpha News.

The videos show a man talking with a group of three security guards near the mall’s rotunda. One of the videos was livestreamed to Facebook on Jan. 7.

I automatically assumed this was overseas, but it's right here in America. pic.twitter.com/Q79eUCG7xh

“Jesus is the only way,” the back of the man’s shirt says, with the popular “coexist” symbol crossed out.

“Jesus is associated with religion and it’s offending people,” a security guard tells the man. “People have been offended.”

They then ask the man to either remove his shirt or leave the mall.

“Again, I’m giving you a couple options. You can take the shirt off and you can go to Macy’s and you can do your shopping. Or you can leave the mall, OK? Those are your only options right now,” one of the security guards explains.

He later claims the man was engaging in “religious soliciting,” which the mall forbids. The man claims throughout the video that he was not attempting to proselytize mall patrons but was simply wearing the shirt while shopping.

The man was asked on a different day to leave the mall because he was preaching, according to the videos. This time, however, he was just walking around the mall.

“Yes, you’re walking wearing that shirt in the form of soliciting and we’ve had guests come up and say they’re offended by your shirt,” one of the guards appears to reply.

Mall policies prohibit “inappropriate attire,” including apparel that “has obscene language, obscene gestures or racial/religious/ethnic slurs that are likely to create a disturbance.” The mall also forbids “picketing, demonstrating, soliciting, protesting or petitioning.”

The Mall of America hosted and promoted a drag show for “all ages” last year in its “iconic rotunda.”

A group called Bloomington Patriots plans to hold a demonstration at the mall on Feb. 4 and is asking attendees to wear “Jesus shirts.”

The Mall of America did not respond to several calls and emails seeking comment throughout the week.