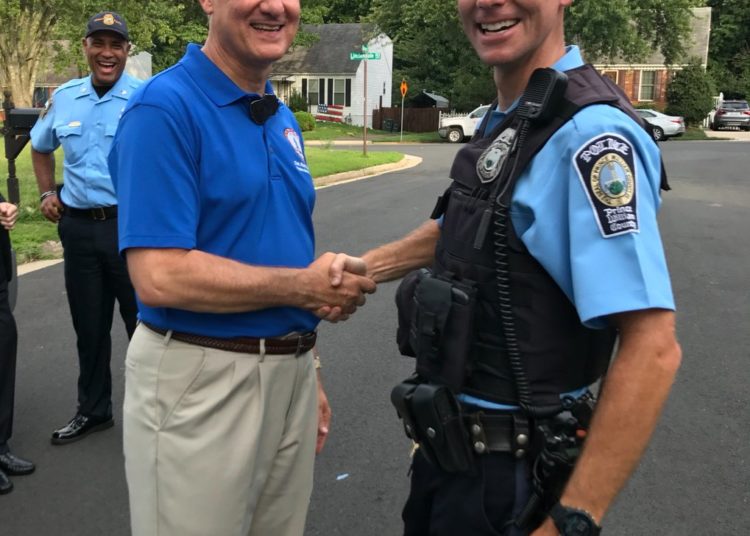 In law enforcement we often hear, and even use, the term “silent majority.”  Most times, we hear about the tremendous amount of support we receive from our community members.  This is typically the case when there is a controversial incident that dons the national spotlight.  During those times, countless communities across the country absolutely rally behind their police departments and its officers.

That support usually comes in abundance and in varying forms.  Those forms include handshakes (Pre-COVID), words of gratitude and thanks, and purchased meals, to name a few.  One of the weakest areas we tend to see though, is generally in social media.  For as popular as social media has become, it constantly breeds conflict and division.  When those same national incidents rear their heads, doubters and naysayers come out in droves.  Their messages grow full of hate and contempt, flooding timelines and drowning out most other messages.  It is no surprise supporters grow quiet; becoming the silent majority.

Silent majority refers to the fact that, though quiet, they still support law enforcement.  They choose to avoid vocalizing support in social media mediums because they do not desire to argue and be attacked for supporting law enforcement.  Their silence does not mean they agree with the counter-arguments.  They simply do not have the desire or energy to fight.

During these times, inside law enforcement circles, you can hear frustration voiced about the support becoming silent.  The support is needed more than ever and officers are often reminded that the support is still present; it simply is suppressed and becomes far less vocal publicly.  The term “silent majority” becomes far more prevalent in those circles during these times.  Officers want supporters to speak up for what they know to be the truth: That police do noble work and the whole sum are not a reflection of the misdeeds of a select few.

Then we have an incident like Minneapolis with Mr. George Floyd on Memorial Day 2020.  We watched as a man literally took his last breath under the knee of an officer who displayed negligent disregard for his need to breathe.  As I watched the video, I yelled at my phone for the officer to get up and constantly questioned why the tactics employed were being used under the circumstances.  Every officer I have spoken with, especially use-of-force instructors, have echoed that the restraint technique used was not proportionate to any resistance depicted in the video. In short, the application of force to someone’s neck is considered a lethal use-of-force in most all training systems and lethal force must be appropriate in that moment for the technique to stand on its own merit.  Industry experts agreed: It failed to meet that standard.

Then there is social media.  Much like the police supporters, the officers grew silent.  Some prefer to wait for all of the information to come out because that is what nearly every officer would request should they find themselves on the wrong end of an investigation.  Others prefer not to Monday morning quarterback.  Some simply do not have the desire nor energy to debate.  To be fair: police officers, in general, tend not to take social media nearly as serious as others do.  It is a great time killer, but lacks reliability when it comes to information.

Here is the problem. When we clam up, we become the silent majority we get so frustrated with.  It is completely reasonable to be able to wholly support law enforcement and all of the great work the men and women of the profession do on a daily basis. All while being able to admit when mistakes are made and the offending officer(s) should be held accountable to his or her actions.  When we become the silent majority, our silence is viewed as acceptance of the action that spurs outrage.  We have to be willing to call a spade a spade, even if it dresses like us.

It is okay to be outraged.  It is okay to want to see us do better.  It is okay to hold each other to a high standard.  But it is not okay to remain silent in the face of tragedy and wrongdoing.  We may not understand what the big deal is if we speak out, but trust that others are waiting to hear us admit that something went wrong.  We need to be willing to assure others that these incidents are anomalies, not prevalence.  And we do not stand in support of them.

Speak up.  Do not allow our silence to speak for us.