On Sunday, March 12, 2017, Navajo Tribal Police Officer Houston James Largo was killed in the line of duty. Largo was responding to a domestic violence call and stopped a vehicle on a rural road near Prewitt, N.M., about 40 miles outside Gallup, N.M. One shot to Largo’s mid-section was blocked by his vest, but another shot to the forehead caused his death several hours later at the University of New Mexico Hospital in Albuquerque. He was 27.

Largo had served with the Gallup Police Department, where he was named Officer of the Year in his first year, and then briefly with the McKinley County Sheriff’s Office before becoming a tribal police officer with the Navajo Division of Public Safety almost five years ago. In 2016, Largo was an IACP Indian Country of the Year honoree. He also received the Navajo Nation Police Department Lifesaving Award for his role in a 2015 domestic violence incident in which one tribal officer was killed and two others wounded. In addition to his police service, he volunteered as a firefighter for McKinley County Fire and EMS.

In response to last week’s domestic violence call, Largo stopped a pickup truck with two people inside at night in a remote area. The exact course of events is not yet public knowledge, but what is known is that Largo was shot at twice by one of the persons in the vehicle. A female passer-by found Largo incapacitated and called for assistance on his police radio. Arriving deputies found the pickup truck driver handcuffed to the steering wheel and the keys to the truck in its bed. Largo lay about 50 yards away. His service firearm, with two rounds fired, was found near his feet. The driver of the pickup truck identified his companion – the suspect – as Kirby Cleveland. Cleveland had fled the scene, but after dawn, tribal police located him hiding in a cave near his residence. Cleveland has a five-year criminal history, including violent crimes and probation violations. The FBI, which is responsible for investigating felonies in Indian Country, is not releasing many details. 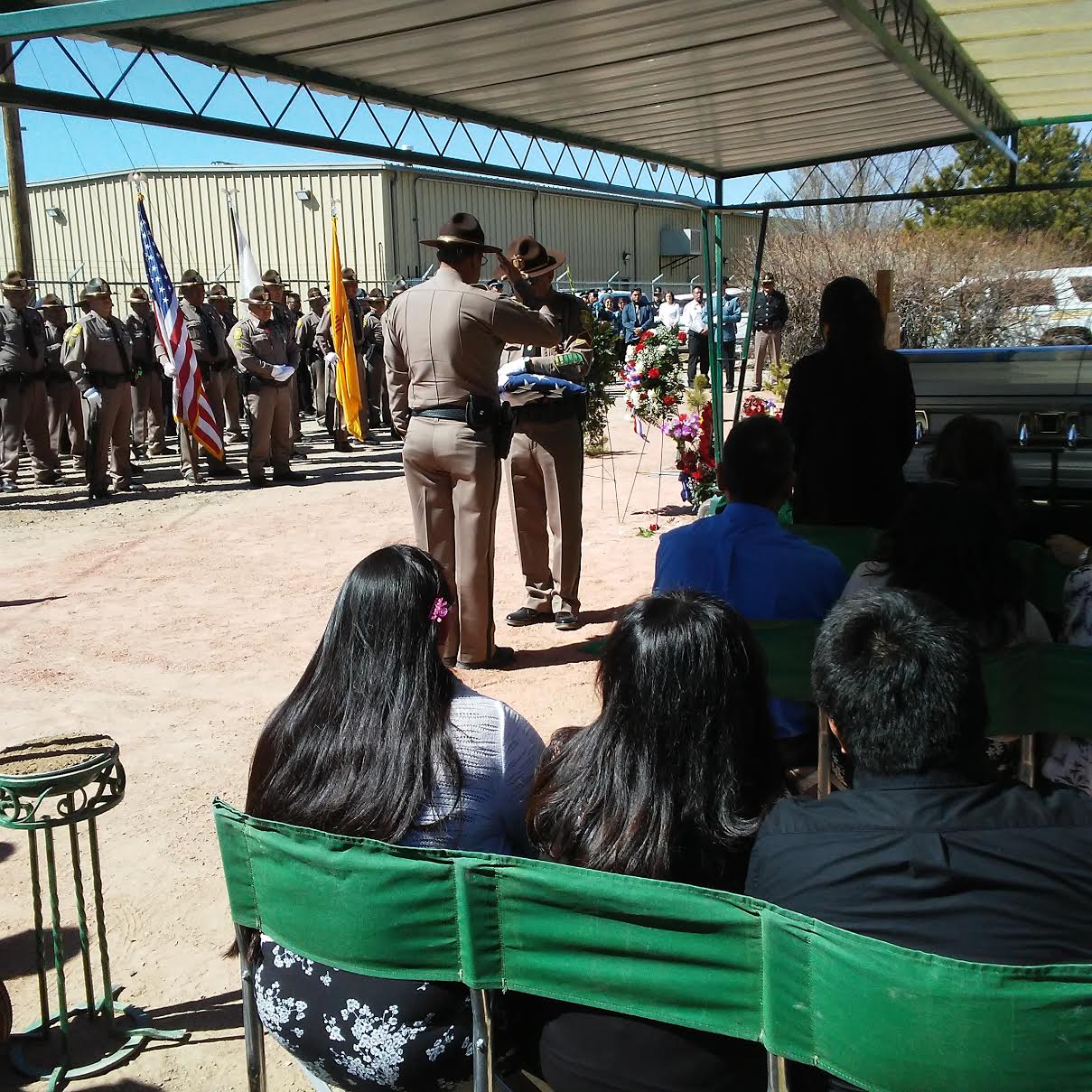 The Navajo are the largest American Indian tribe, with 200,000 of its 300,000 members living on the 27,000-square mile reservation, which covers parts of Arizona, New Mexico and Utah. The Navajo Nation is about the size of West Virginia, and it is one of the poorest regions of the United States. Per capita income for Navajos is about $7,000 annually. About 43 percent of the tribe live below poverty level, and the unemployment rate is around 50 percent. The Navajo Division of Public Safety (formerly the Navajo Tribal Police) is divided into seven districts. About 210 sworn officers work in one-officer units, each officer responsible for patrolling roughly 70 square miles. The agency fields about 290,000 calls for service each year, with domestic violence making up about a third of them. Indian tribes can pass and enforce only misdemeanor criminal laws; felonies must be investigated by the FBI.

Born in Gallup, Houston Largo was Navajo, born to the Salt People Clan on his mother’s side, and born for the Towering House Clan on his father’s side. On March 16, 2017, he was laid to rest in Sunset Memorial Park in Gallup. He is survived by his mother, sister, two brothers and many clan members. In addition to his family and representatives from his and other police departments, New Mexico Governor Susana Martinez, Navajo Nation President Russell Begaye, Vice President Jonathan Nez, and Speaker Lorenzo Bates were in attendance.

Gallup is ranked the second-poorest city in America; the majority of residents are Native American. The cemetery is a testament to the area’s population, with common Indian names inscribed on most of the tombstones, many of which are placed at the graves of infants and children. In addition to a number of Begays, Chees and Yazzies, there are many Largos in the Park. Some of them are likely relatives of the slain officer, and many more of the deceased are probably clan relations.

The difficulties experienced by the Indians in this area are typical reservation problems: in addition to extraordinary poverty levels, residents experience extremely high levels of diabetes, glaucoma, alcoholism, drug addition, HIV/AIDS, domestic violence, infant mortality and suicide. Tribal social services try to fight the problems of their society, but doing so is a Sisyphean task. One commonly found poster reads “Domestic violence is not traditional.”

Along with problems comparable to third-world countries, American Indians also have a high rate of enlistment in the armed services, and they hold veterans in high regard. Several veterans’ tombstones were lined up against a wall near Officer Largo’s grave, waiting for relatives to be able to afford to bring them back to final resting places on a nearby reservation. The names inscribed on the white tablets are all clearly Indian: along with another Largo is a Billison, a Curley and a Silversmith.

Veterans were outnumbered at Houston Largo’s funeral service by police officers from other tribal departments, as well as the New Mexico State Police, Gallup Police, McKinley County Sheriff’s Office, Albuquerque Police and Phoenix Police. The sea of brown and green and black uniforms formed a backdrop for the honor guard, the color guard, the police bagpipe players, and the Gallup PD chaplain who played taps. Many extended family members, friends and community members crowded the cemetery. Several Navajo women wore their hair in the traditional bun wrapped with white yarn, and some of the Navajo men wore their hair in the traditional men’s bun. Many men sported rez hats – cowboy hats, usually black, that are common the reservation – along with jeans and boots. The “moccasin telegraph” – the Native grapevine – was in full swing, with attendees swapping the few details they had about the slaying of Officer Largo. In the void left by a lack of information from the authorities, rumors abounded.

The American flag, the New Mexico Flag and the Navajo Nation flag all flew in the unforgiving wind that kicks up the red dust of the desert. Unlike cemeteries in wetter parts of the country, this Southwestern resting place sports no green grass.

The immediate family was seated under a canopy in front of Officer Largo’s casket, which was painted with a typical desert scene and the badges of the three police departments where Largo served. Six officers folded the American flag into the traditional triangle. One Navajo tribal officer’s face trembled with the effort of holding back tears. At the end of the service, six pairs of white gloves remained on top of the head of the casket. Family members left small flowers and flags at the other end.

Before the Navajo Nation Police Chief presented the flag to Officer Largo’s family and the governor and other dignitaries offered their condolences, a dispatcher made a final broadcast over the loudspeaker. “Police Officer Houston James Largo, you are free to go home,” she said.

Liz Martinez is a former New York State investigator. She is working on a Ph.D. in linguistics, with a research focus on coerced confessions and wrongful convictions. She is a consultant and expert witness in the areas of forensic linguistics and retail security, especially organized retail crime. She is also the author of the book The Retail Manager’s Guide to Crime and Loss Prevention (Looseleaf Law, 2004), a mystery novel, several short stories and hundreds of articles about police and security. She is currently at work on a biography of Iwo Jima flag-raiser Ira Hayes, a Pima Indian. She can be reached via www.LinkedIn.com/in/LizCMartinez.

Oklahoma officer responds to residential fire at his own home, rescues family