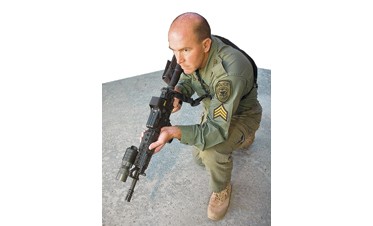 During a recent law enforcement/military writers conference at Blackhawk! Products Group in Norfolk, Va., significant conversation took place regarding stocks and slings for shoulder weapons. The unanimous consensus:Rifles and shotguns should definitely have slings attached.

From there, opinions varied regarding the type of sling: Should it be a traditional two-point? A tactical three-point ? Or the most recent trend, the single-point? As a hunter and SWAT operator, I ve had the opportunity to use each. I ll discuss their pros and cons, along with different stock and weapon-mounted light options.

Thetraditional two-pointsling allows for attachment on the rear of the stock and at the front of the forearm; hence, two points. This arrangement is most popular with hunters. It allows the long gun to be carried several ways: muzzle up or muzzle down; or weapon in front, at the side or on the back. The two-point sling is offered in leather or nylon, and some offer a bandoleer way of carrying additional cartridges or shot shells (although my experience with this type is that, eventually, the spare ammunition will fall out of the sleeves on the sling).

The advantages of this type of sling are that it s readily ambidextrous, requires minimal training to use, is generally inexpensive (notwithstanding leather slings) and can be easily adjusted to fit diverse body sizes. At its most basic, it allows the user to carry the weapon hands-free and secure the gun to the user s body. This sling type allows the user to employ a hasty sling technique that provides a fairly stable shooting platform, thereby increasing the accuracy potential.

Thethree-pointsling attaches to the long gun in a similar manner as the two-point sling. The third attachment point is actually along the sling itself. One of the early three-point slings offered was on the popular Heckler Koch MP-5. This sling style probably has the most variations. In fact, the Universal Swift Sling offered by Blackhawk! allows for more than 30 different carrying positions. A major bonus with this type of sling is that it allows the user to rapidly move the sling from a front (or port arms ) to side or back position.

This sling style affords the user the ability to immediately transition to their sidearm in the event of a malfunction or if they must reload. It also facilitates the transition to hands-on or less-lethal use-of-force options. When considering a three-point sling, I would strongly recommend a brand that provides a quick-detach capability, should an operator need to rapidly divest himself of his weapon.

From personal experience, this type of sling requires the greatest degree of practice to gain and maintain a level of proficiency. The greatest challenge faced with this type of sling is transitioning from a strong-side carry to a support-side carry. A sling that includes an easily reached lever that allows the user to lengthen the sling will aid in this transition. Due to its extreme versatility, this might be an outstanding option for the officer who is assigned a specific shoulder weapon. However, where multiple officers are required to share the same shoulder weapon a pool patrol car with shotgun or patrol rifle this probably isn t the best option due to variances in officer stature and hand dominance.

Thesingle-pointsling currently enjoys a great degree of popularity. It s more versatile than a two-point sling but more user-friendly than a three-point sling. The main advantage of a one-point sling is that it can easily be moved from the left side to the right side of the weapon platform (if the attachment point itself isn t ambidextrous). The one-point sling is also generally easy to adjust for officers of different stature. This versatility makes the single-point sling an ideal choice to be mounted on long guns that are shared by officers. Due to its ease of adjustment, this type of sling is also good for an officer who might need to deploy it with concealed body armor or a bulky load-bearing vest.

Regardless of the type of sling, less-lethal 12 gauge shotgun platforms are now frequently seen with a colored (usually orange) sling to designate their less-lethal dedication. I ve also seen Simmunition-dedicated long guns equipped with blue slings as a visual clue to their intended purpose.

Until recently, virtually all shotgun stocks were either the traditional fixed or a top-folding style. Thanks to Knoxx Stocks, officers can now add not only an adjustable length of pull stock similar to that found on AR-15s, but one that also significantly reduces felt recoil. In fact, studies have demonstrated a greater than 50% reduction in muzzle rise when the Knoxx recoil-reducing stock system is used on a 12 gauge shotgun. The ability to lengthen or shorten the length of pull also is a great benefit. Whether due to a difference in stature between multiple officers or the same officer using the shoulder weapon while wearing concealable body armor or more bulky up-armor, this is a nice feature of adjustable shoulder stocks.

Traditionalists may prefer a fixed shoulder stock for shotguns and patrol rifles. The fixed stock used to be considered a more stable platform to shoot from, but modern adjustable stocks have succeeded in removing the play or wobble found in older telescoping or folding stocks. Motor officers who carry a shoulder weapon mounted on their motorcycles are most certain to require a folding stock, but I predict the Knoxx stock will become more prevalent on shotgun-equipped police motorcycles.

Whether deploying lethal force or less-lethal kinetic energy impact munitions (e.g., 12 gauge sock rounds, 40 mm munitions), an officer must first properly identify a threat potential before pressing the trigger. I m a firm believer that in addition to slings,allshoulder weapons, including less lethal, should have an attached lighting system. Numerous options are available, but the most popular are still those manufactured by Surefire, the pioneer of weapon-mounted lights.

Just as there s a variety of manufacturers, multiple methods exist to attach the light and activate it. For both pump-action and semi-auto shotguns, the replacement of the factory forearm with one incorporating an integrated light is the most popular. A combination pressure-switch for momentary light and rotating lever for a more constant on position are preferable. The ability to have a master kill switch helps ensure the light won t be inadvertently activated at an inopportune time, as well as prevents it from turning on while stored in a carry bag, burning out the batteries or bulb.

The most popular means of mounting a light to a patrol carbine is via picatinny rail. The light is generally activated via tape or pressure switch.Note:The operator s hand position should not have to change in order to activate the light. At the range, I ve seen officers holding the magazine well portion of an AR-15 in a manner similar to how they would grip a forward grip. Some of these same weapons gripped in this manner have a pressure light activation switch situated for the more traditional forearm hold. Although this is a training issue, it s also an equipment consideration.

A final consideration when outfitting a patrol rifle/carbine or shotgun with a preferable sling, stock and light is the patrol car mounting system. If the weapon system is carried in a bag in the trunk not preferable because it s less accessible these options are not problematic. If, however, the shotgun and patrol rifle/carbine are mounted in the passenger compartment for more immediate access, as they should be, the stock and light, as well as any optic, become a significant factor in selecting the proper mounting bracket. Therefore, it s critical that the fleet coordinator responsible for outfitting the police vehicles be made aware of appropriate information so they can select the proper mounting brackets.

Chris Boydis a 21- year veteran of the Carlsbad (Calif.) Police Dept. He has worked patrol, K-9, and vice/narcotics. Boyd is a certified Taser, less lethal, NFDD and firearms instructor, and is currently assigned as a motor sergeant in the traffic division. He s also an entry-team leader on his department s SWAT team.