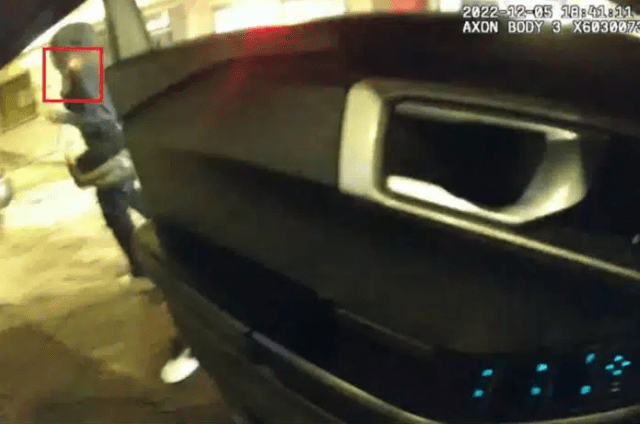 The video is from Sgt. Cody Blanshan’s camera and shows an exchange of gunfire between himself and Johnson, the police department said in a news release.

The police department also released still images from the shooting, one showing Johnson pointing a handgun at Blanshan and another showing a muzzle flash coming from Johnson’s gun.

The incident took place around 6:10 p.m. near Earl Street and Hudson Road on the city’s East Side.

“Any loss of life is tragic, and we’re keeping the family and friends of Mr. Johnson in our thoughts as they grieve the loss of their loved one,” said St. Paul Chief of Police Axel Henry. “We know there aren’t words to alleviate their pain, but we hope the release of these videos will help begin to answer some of their questions.”

The Minnesota Bureau of Criminal Apprehension is investigating the incident.

In a Wednesday update on the shooting, the BCA said:

“St. Paul police responded to the area near the intersection of Earl Street and Hudson Road just after 6 p.m. on reports of a domestic assault. The caller reported the man, now identified as Johnson, was armed. Officers formed a perimeter. Meanwhile, a woman at a business on Hudson Road left the business and got into her car. She told BCA agents that as she started to pull away, Johnson approached her vehicle and was pointing a gun at her. Sgt. Blanshan and another St. Paul police officer were parked in a squad car nearby as part of the perimeter. Surveillance video shows the squad car striking Johnson in the back and side. The squad car pushed Johnson past and behind the other vehicle, knocking him to the ground. Johnson got up and the video appears to show an exchange of gunfire between him and Blanshan, during which Johnson was struck. He fell to the ground, dropping his gun. Officers then handcuffed him and gave medical aid until EMS arrived.

BCA crime scene personnel recovered a .45 caliber Glock Pistol and three .45 caliber bullet casings at the scene. They also recovered 10 9-millimeter cartridge casings, consistent with the department handgun Blanshan fired. There is surveillance, body camera and squad camera footage that captured portions of the incident. BCA agents are reviewing the video as part of the investigation. The BCA will release that video as part of the case file once the case is closed and fully adjudicated. The attorneys for the officers involved have informed the BCA they will provide written statements in the days to come.”

The BCA said Blanshan has been a law enforcement officer for 10 years and is on standard administrative leave.