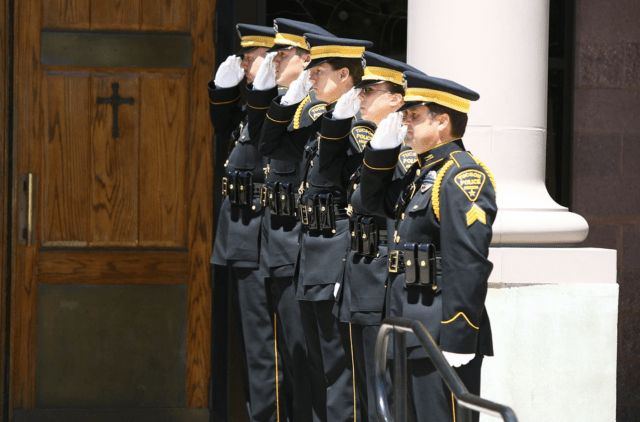 Somber Understanding of a Police Funeral

Somber Understanding of a Police Funeral

I’m preparing for a police funeral today. While I didn’t know the officer who worked for a neighboring agency, I try to attend memorial services for any line of duty death in my county.

The master officer lost his life at the hands of a gunman. The murder occurred in the early morning hours as the officer stopped a motorcycle in a residential tract. We don’t know why he initiated contact, since he didn’t radio in the stop. However, the bike was previously stolen.

After the detention was initiated, yet without warning, the rider of the motorcycle turned and fired six rounds, striking the officer four times. Tragically, he passed away a few hours after being shot.

Preparing for a Police Funeral

So I walk into the locker room at my department about an hour before our contingency will join 3500 other cops to honor our slain colleague. Upon entry I see a full house, which is not unusual under the circumstances. Most of my friends are still in civvies, but a few have already donned their Class A uniform.

I approach my locker and spin the dial. When I lift the locking mechanism to open the door, I see the usual … four uniforms lined up with a fifth covered in a dry-cleaning bag. That is how my formal attire is maintained; to keep it prepared for such an occasion.

My Sam Browne is hanging on the inside of the door. After lifting it from its’ place I prepare to apply the leather polish making the basket weaved gunbelt glisten black.

Next I pull the Kiwi shoe polish and brush from a small plywood container within my locker, and begin to spit shine my boots just like I did in the military.

Finally, I shine my badge, tie clip, silver snaps on my keepers, and hat piece on my cover. And of course the little black band stripes my shield.

Now I’m ready to get dressed. It always feels strange to dress for a funeral, because it’s the only time I don’t wear soft body armor beneath my uniform shirt. It always feels incomplete, like I forgot to pin my badge in place.

There is some idle chatter by several guys getting dressed nearby, but overall it’s a somber mood as we discuss details surrounding the death.

After getting dressed I muster in the roll call room with other officers as we figure out who’s riding with whom in the caravan of patrol cars getting ready to make the journey. We pile four officers to a car and stage in our front parking lot. Soon after, a few of our motor officers join in before making the trek to one of the mega churches in the county that is able to accommodate the huge law enforcement presence.

Upon arrival at the church, we exit our patrol units. In doing so I adjust my tie to ensure it’s straight. After being inspected by my partner, and reciprocating the favor, we walk toward the auditorium.

While taking a slow stroll among the sea of uniforms, I exchange “hello’s” with several people that I know from allied agencies, and get reacquainted with a few academy classmates that I haven’t seen in years. For a moment we lose sight of the reason for our presence as we rehash war stories from days gone by. Yet we quickly return to form when they begin to usher uniform personnel into the cathedral—taking up about 80 percent of the available seats, while family and civilians occupy the rest of the packed house.

It’s time for silence as the service begins.

Family members speak, a poem is read, music is performed, and the pastor offers a message of hope. The length of a memorial service is never too long as far as I’m concerned. These heroes deserve a few hours of attention and praise to cap their sacrificed life.

As the service concludes, the public display of unity will mesmerize the community. I’m unsure how many police cars it takes to shuttle 3500 cops from the church to the cemetery, but that is about to occur.

With the hearse leading the way followed a battalion of motor officers and then several miles of police units, we caravan in single file—like a parade without the pomp and circumstance. Amazingly, the roads are lined with patriotic citizens flying American flags, holding up signs, and a few are saluting as we pass by.

Driving in these processions might be the proudest moments I’ve experienced as a cop. Regardless of the number of motorcades under my belt they never get old. I have butterflies twirling in my stomach and a lump in my throat. I am so proud to be a police officer at a moment like this.

It takes quite awhile to get everyone to the graveside once we arrive at the cemetery. Yet people are patient. There is nothing on the clock that has priority.

The pallbearers stand in the ready position at the hearse. And then movement begins. They reverently carry the casket while a bagpiper offers the traditional rendition of “Amazing Grace.”

The lump in my throat has expanded as they reach the crowd surrounding the prepared six-foot hole in the ground, waiting to entomb a beloved family member, friend, and servant to his community.

The pastor shares a few more deeply personal sentiments and then offers a prayer.

There is a 21-gun salute and missing-man-formation flyover by helicopters representing local agencies.

Lastly, the honor guard folds the flag and presents it to a tearful woman who’s just been made a widow by a punk riding a stolen motorcycle. Next to the lady in black are two children who seem lost in confusion as the bugler plays Taps.

As the service concludes we all make our way to the cars and unceremoniously disperse from the cemetery.

My partners and I are scheduled to work various assignments during the evening, so off to work we go.

As fate would have it, two of my colleagues become involved in a fatal shooting of a robbery suspect trying to make his escape. As a result, I respond as part of the OIS investigative team.

While the merits of the shooting need legal justification, don’t think for a minute that each coworker didn’t remember the recently buried officer as the bad guy tried to take their lives during his getaway.

But the officers prevailed as the crook failed. What a day!

The District Attorney’s office will analyze the legal culpability on the part of our officers involved in the fatal shooting. My role was to assist compiling the administrative investigation.

While we need to shield our emotions from the public during these highly charged events, I assure you we gave some high fives and back slaps in private. The last thing anyone wanted to do was prepare for another police funeral.

Author’s Note: This article was inspired by an actual day that occurred during my career. On March 9, 1993 Master Officer Howard Dallies of the Garden Grove Police Department was murdered. I attended his funeral along with a contingent from my department. Later that day two of my partners and friends were involved in a fatal shooting. As you can imagine, it was quite a day!