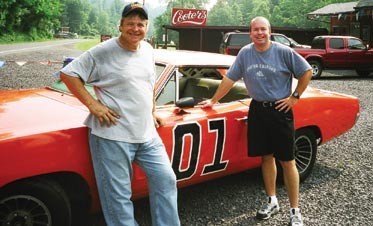 Jan. 26, 1979 the day my future driving career took a wild slide through the back roads of an obscure southern county. The Dukes of Hazzard television show debuted, and millions of pre-license adolescents like me drooled over a show featuring a shiny orange muscle car with its weekly how-to primer on sliding sideways, burnouts and jumping an occasional bridge. To watch Bo and Luke slide that big ol General Lee around the dirt roads of Hazzard County with Boss Hog and the boys after them made it seem that driving was one exercise in controlled chaos after another.

Of course, back then, the producers of the show never mentioned the few hundred Generals that were sacrificed in the name of good TV. So, as I grew up and began to drive, the maneuvers that looked so cool on TV led to real-world realities that usually resulted in replacement fenders, a few trips to traffic school and a bruised ego. The Duke antics did show that an exceptionally talented driver could make a big, heavy, solid rear-axle muscle car handle pretty darn good. Unfortunately, none of those talents were ever taught in local high school driver s ed classes. Since then, driver s education for the masses hasn t really improved much, but thankfully the cars we drive have.

In my first installment of Smart Cars (November/December 2006, p. 20), I discussed how emerging technologies previously reserved for elite automobiles have trickled down into mainstream automotive offerings. That same technology has also worked its way into the vehicles you and I drive every day on patrol. In Part 1, I discussed ABS and traction control. In this installment, I will discuss another radical technology that has worked its way into the modern day patrol car and SUV: stability control.

If ABS is the head of the family and traction control the prodigal son, think of stability control as the first cousin. To review, both ABS and traction control use wheel sensors to either detect impending wheel lockup or wheelspin. A computer integrated into the system takes the information from the sensors and reacts accordingly. Both of these systems are designed to deal with vehicle motions that occur generally when the vehicle is traveling in a straight line.

Stability-control systems use these same sensors, plus other components to address lateral (side-to-side) motions of the vehicle associated with chassis behavior. Electronic stability-control systems were first introduced in 1995 by Mercedes Benz in its S-Class sedans. The system, called ESP (Electronic Stability Program), was developed by the Bosch Corporation, and was the first system to address lateral stability issues in a production vehicle.1

Nowadays, stability control comes standard in many mainstream automobiles, including the new Dodge Charger Police Package and the four-wheel-drive (4WD) version of the 2007 Chevy Tahoe Police Package. The system comes under many names, such as ESP (DaimlerChrysler), StabiliTrak (GM), Advance Trac (Ford) and others, but all of the systems essentially operate under the same principles.

As patrol officers who must successfully negotiate roadways under the worst of conditions, anything that can make our driving responsibilities easier is always welcome. Furthermore, with the hundreds of pounds of equipment we carry in our cars, that extra weight can take a bad-handling condition and make it worse. I noted in Part I how ABS systems haven t led to a marked decrease in accidents, but the implementation of stability-control systems definitely has. A 2004 study by the U. S. Department of Transportation s National Highway Traffic Safety Administration (NHTSA) determined that stability control systems do appear to reduce accidents, especially in SUVs. According to NHTSA, 7.4 percent of the light-vehicle fleet in 2003 was sold with some form of stability-control system. Of the vehicles studied, stability-control systems reduced single-vehicle crashes in passenger cars by 35 percent when compared to the same models sold in prior years without the technology.

The effects on SUVs were even more impressive. The study showed that SUV single-vehicle crashes were reduced by 67 percent in models with stability control. Evaluating fatal crashes only, stability control was associated with a 30-percent reduction for passenger cars, and 63 percent for SUVs. According to NHTSA, This technology appears to provide safety benefits by reducing the number of crashes due to driver error and loss of control because it has the potential to anticipate situations leading up to some crashes before they occur and automatically intervene to assist the driver. 2 So, it appears a stability-control system in your patrol car can help you stay safer behind the wheel.

As mentioned above, one component of a stability-control system is the use of wheel sensors also used for ABS and traction control. Stability control adds steering-angle sensors, and a yaw sensor. Yaw is movement of an object as it rotates on a vertical axis. In other words, when your car starts to spin and the lateral forces make the rear end want to touch the front end of your car, blame it on the yaw.

When that begins to happen, the yaw sensor determines that you re about to get in over your head, and works with a lateral-force sensor as well as the steering-wheel sensor to evaluate whether you are about to go from hero to zero on that off ramp. If the answer is yes, the system begins to apply braking force to individual wheels to steer the vehicle back toward its intended path. In some cases, the system can also reduce power and torque to assist in traction and weight transfer.

As an example, let s use a typical cop scenario: You respond across town in heavy traffic to an officer-assistance call. As you thread your way through traffic, you finally reach a spot on the interstate where traffic thins out. As you rocket down the road at Mach 2, you realize your exit is coming up, and coming up fast. You hammer the brakes and slide over toward the cloverleaf. As you reach the bottom of the ramp, you turn the wheel to the right, and a sickening feeling overcomes you. No matter how much you turn the wheel, your 5,000-plus lbs. of black and white wants to plow forward like a John Deere in a Kansas cornfield.

Then something magical happens. Your patrol car, equipped with stability control, senses the impending understeer because it determines that the amount of steering wheel applied by you doesn t match the lateral g-force the car is creating. It determines that the front tires must be sliding and not gripping (understeer). Because you are trying to steer to the right, the system applies brake force to the right rear wheel. The braking causes the right side of the car to slow down allowing the left side to rotate around to the right, diminishing the understeer.

If the same scenario resulted in the car s rear end wanting to slide out toward the outside edge of the ramp (oversteer), the system would sense the oversteer and adjust accordingly. Because the car would be starting to slide to the left, the system would apply brake force to the left front wheel, allowing the nose of the car to straighten out. In cases where the system also dials back the engine power, this allows the vehicle to scrub off speed as well as transfer needed weight over the front tires to aid in traction.

The best part? The system often senses what s occurring well before you do, so it s already trying to unscrew your mess well before you make the attempt. This means all you have to do is steer the vehicle. The system does the rest.

As the center of gravity increases, the more effective the system can be because it can curb radical weight-transfer situations (which leads to rollovers) well before the driver can sense what s happening and react. In some cases, like the Dodge Charger, the stability control system has multiple settings, which allow drivers to adjust how much computer assistance they want.

I have tested the system in the Charger during EVOC evaluations in a controlled environment. In emergency lane-change maneuvers, the system worked well, allowing me to reestablish control each time I tried to upset the Charger's chassis. I could clearly feel the application of braking force to individual wheels, and the system was predictable each time. It was impressive, even more so when I tried the same maneuvers at the same speeds with the system disabled. Remember Bo and Luke? Exactly.

A Little Rain on the Parade

Of course, no mechanical system can violate the laws of physics, overcome sheer stupidity or neutralize bad judgment. After all, the only things connecting your vehicle to the roadway are the tires, and if you do something that vastly exceeds the capability of your tires to grip, no system will help you avoid disaster. Like ABS and traction control, stability control can assist you with regaining control in emergency situations, but it can t replace the proper driving skills and decision-making processes that you need to employ on a day-to-day basis.

That said, stability-control systems are one more option offered in modern patrol vehicles that can help you stay safe and on the road.