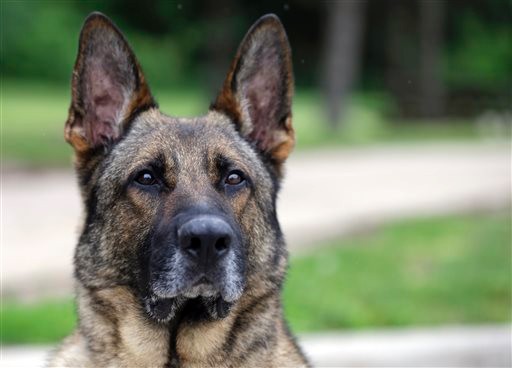 INDIANAPOLIS (AP) — Five retired military dogs that spent years working in war zones are putting their noses to new uses by helping police in the U.S. combat methamphetamine and other drugs.

The dogs are being deployed to departments in Indiana, Texas, Tennessee, Nebraska and Georgia as part of a venture that organizers say gives police a resource they couldn't otherwise afford and provides the dogs a new mission.

"If you were to look at these dogs and watch them, when they come back, they're ready to work," said Mike Thomas, a Harris County, Texas, sheriff's officer and board member for the Houston-based organization K9s4Cops, which is using a $25,000 grant from Westport Pharmaceuticals in St. Louis to acquire the dogs and train them to work with their new handlers.

"Even if they only work for two more years, if they go out there and they take a pound of heroin off the street or 10 kilos of cocaine off the street in Houston that would have made it to Chicago or New York, and maybe save somebody from a drug habit, or they find one bomb and save 10 lives, it's worth the whole program."

The U.S. military has used dogs since the Revolutionary War, enlisting them to guard facilities, detect drugs and explosives, and search for people or items. Historically, many were euthanized or left behind once their deployments ended.

That has changed, in large part due to a 2000 law signed by President Bill Clinton that requires the Department of Defense to report annually the number of military working dogs that are adopted, transferred to law enforcement or euthanized. Legislation in recent years has aimed to allow retired dogs to be transferred to Lackland Air Force Base in San Antonio or another location if no suitable adoption is available at the facility where a dog is located.

Many of the retiring dogs return to training facilities such as AMK9 Academy in Anniston, Alabama, where they're assessed for health and behavioral issues and then either placed for adoption or repurposed as domestic working dogs for police agencies and security companies.

"They're getting these hero dogs that are like trained veterans coming back," AMK9 managing director Paul Hammond said.

K9s4Cops teamed with AMK9 to acquire the five military dogs after Westport officials offered the grant on the condition that the dogs be deployed in areas experiencing high meth rates. Indiana led the nation for meth incidents in 2014 with 1,470, according to Drug Enforcement Administration statistics.

"No other drug is more labor intensive for law enforcement than battling meth," said Paul Hemings, Westport's U.S. general manager. "You're not just going in and arresting the criminals. You have these labs out there that blow up, are environmental hazards, have a huge cleanup left behind."

Police dogs typically cost $10,000 to $15,000 each, but K9s4Cops was able to stretch the Westport grant to cover more animals because the retired military dogs were already trained.

The dogs placed through the grant include Axel, a 5-year-old German shepherd that spent three years in Afghanistan as a search and narcotics dog. He'll spend the rest of his working career in Indianapolis, where he's been assigned to the Lawrence Township School District police force.

Axel and his handler, Officer Matthew Hickey, spent six weeks training together at AMK9 before heading to Indiana, where the dog already has put his nose to good use. Hickey said Axel recently found marijuana and cocaine that resulted in three arrests during an Indianapolis Metropolitan Police Department drug investigation.

The school district will share Axel with the Lawrence Police Department in Indiana. Besides detecting drugs, he will help search for other evidence and for people.

Hickey said it's gratifying to find a new purpose for a "hero" dog.

"There's a lot of effort that went into providing these dogs for the military overseas," he said. "Instead of wasting them … they're pushing them back into the local community that has a need."