Reality Based Training: We're Running Out of Ammo 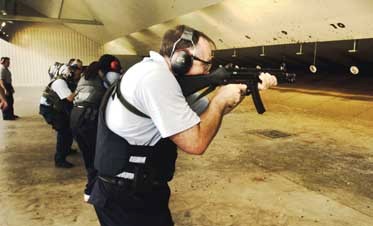 As a direct result of the actions overseas, law enforcement agencies are discovering that there is a shortage of ammunition. Government plants pump out literally billions of rounds of ammo, but law enforcement agencies must get in an ever-growing queue for their annual supply. The ammunition that is available has grown much more expensive. Prices for components have skyrocketed, even for those who choose to buy components and reload their own ammo. Agencies that have collected and recycled their brass over the years are discovering its high value, as have thieves some ranges have actually been burglarized for their brass!

I was recently teaching an instructor school when I heard a couple of the class participants discussing this very issue and stating that they won t have much work to do in the coming months as a result of the crisis. They were firearms instructors. I chuckled to myself, knowing that much of the material they were going to receive in my class was going to make their jobs harder, not easier.

Their jobs were going to grow more difficult in the sense that in order to harness the true potential of this crisis, they were going to have to abandon many of their old ways. This is a blessing, not a curse.

Although much of what I propose is blasphemy to the high priests of conventional firearms dogma, I ve maintained for quite some time that much of the training done with conventional ammunition actually can program participants for failure in gunfights. In the ways of old, firearms training is a numbers game: In very little time, a large number of people must get through various drills designed primarily to get them to a certain level of proficiency in an effort to reach the ultimate goal of qualifying.

Why Do You Carry A Gun?

Soldiers and law enforcement officers carry firearms for only one purpose: the destruction of human beings. Some people actually die as a result of the destruction process, and some of them live. Unfortunately, some agencies couch lethal-force encounters in terms that confuse the combatant. Phrases such as shooting to stop the threat might play well on the 6 o clock news, but it confuses people tasked with delivering potentially lethal force against another human being.

Bullets destroy flesh and bone. Bullets cause massive blood loss if accurately delivered. Bullets disrupt electrical impulses in the body necessary to carry out motor function. If placed properly, bullets effectively stop evil actions the intention of shooting somebody in the first place and the likelihood of effective bullet delivery is the death of the participant.

This is the root of firearms training. This is its essence. To believe otherwise is not only foolhardy, but also dangerous to society because it s inappropriate to rationalize your way through a gunfight and struggle with a moral dilemma at a critical moment. To quote General Patton, Combat is not the place to be changing your belief systems.

Hence, much of the training we must do to prepare for gunfighting is not the delivery of a string of fire at three, five and seven yards, on command, in the open, shoulder to shoulder with 20 other people, against a black silhouette with its hand on its hip. Rather, it s shooting projectiles at other people in a dynamic setting and firing as many times as necessary in order to put that other person down while remaining tactically aware of what else is occurring in the immediate vicinity. Conventional range training does not accomplish this. Gunfighter drilling and force-on-force practice does.

What exactly is gunfighter drilling? Simply put, it s a method for learning the steps to the dance prior to going into a dance competition. It would be insane to enter a national dance competition having only gone to a half-dozen dance lessons. Yet this, typically, is what we ask our officers and soldiers to do. We give them a few basic dance steps and then test those steps, telling them that they have qualified if they complete those steps well. This ain t the dance it s anything but.

From a psychological perspective, you could write volumes about the complexities of gunfighting. From a technical perspective, though, gunfighting is nothing more than an eye-hand coordination sport. To shoot decisively and accurately, you need a lot of repetitions against realistic targets, including actual people who interact with you in a dynamic fashion.

This is impossible to perform with conventional munitions, but many trainers are married to their ranges. Hell, they spent all that money on them, they have to use them. Add to this the fact that most firearms trainers are gun guys they like to shoot real guns. That s great, but most of the people they train are not gun guys. In fact, many are terrified of their own guns, and that fear gets in the way of learning the mechanics of gunfighting. Take away the fear of the gun and get participants enjoying the process of learning how to gunfight through the use of unconventional munitions in realistic settings against dynamic targets, and I guarantee the residue of that experience will be a much higher level of gunfighting proficiency.

John Meyer from Team One Network used the analogy of differentiating between figure skaters and hockey players in the training of gunfighters. Both figure skaters and hockey players must know how to skate, and within their respective sports, both compete at a high level of technical proficiency. But with the exception of Tonya Harding, figure skating isn t a contact sport. Many of the skills learned through conventional firearms training prepares participants for marksmanship, much like figure skating prepares skaters for precision maneuvers. And while skating precisely would certainly be desirable in a hockey game, aggressiveness of action is much more important to winning the game.

I contend the vast majority of firearms training can and should be accomplished with unconventional munitions and training devices that permit for much more dynamic interactions between shooter and target. By eliminating the conventional bullet from the equation, trainers can teach gunfighting skills in much more dynamic settings that more exactly approximate the conditions in which gunfights will occur, but in a much safer fashion. By getting off the square range and using technologies that do not fire conventional munitions, trainers will find themselves free of the range and all of its hazards, hazards that caused them to modify the use of firearms in a manner to permit a vast number of people to safely interact among each other but which ultimately dooms the participants to behaviors that would be unsound during a gunfight.

The Chinese symbol for luck is the combination of the symbols for crisis and opportunity. I believe the ammunition shortage may prove fortuitous. We now have an amazing opportunity to do away with many of the age-old problems associated with conventional firearms training, and we can do so by presenting a solution to our administrators for the burgeoning problem of the shrinking ammunition supply.

Walk towards the light, my friends. I m going to abolish conventional firearms training and qualification if it s one of the last things I do. The ammunition shortage provides an amazing opportunity for you to hop on the bandwagon.

Until next time, train hard, and train safe.