Policing in America: The Power of Something Else 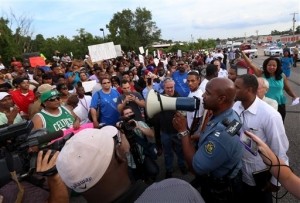 There are too many police incidents where loud, cop-haters dislike the force police have used, including lethal. They condemn the officers involved for not doing “something else.” However, they rarely offer what something else should have been. But they are very emphatic about the cop being wrong, so I guess that’s supposed to be enough.

Unfortunately, for too many people, it is enough. Former Police Officer Kim Potter is now in prison for making a tragic but legitimate mistake. But the prosecutor and jury apparently believed Potter should have done something else. Well, so did she.

Daunte Wright’s illegal actions triggered the shooting, Potter admitted she’d made a mistake, and her remorse was evident and seemed sincere. But it doesn’t matter because she didn’t do something else. What was that something else? Who cares?

They just should have!

The NPA extensively covered the case of Oklahoma police Lt. John Mitchell. He courageously ended a mobile, active shooter incident by shooting and killing the armed suspect who refused to surrender, had shot at civilians, and the police.

Nevertheless, the prosecutor went after Mitchell as if he’d jilted his sister. But after reading much of the case material, it was evident the prosecutor simply did not like what the officer did. He apparently thought Mitchell should have done something else. But I missed the part where he offered reasonable alternatives. And that’s also key: reasonable.

Too often, when someone does offer something else, it’s not reasonable.

What’s reasonable is using necessary force. In the department I worked for, “Necessary: means that no reasonably effective alternative to the use of force appeared to exist and that the amount of force used was reasonable to effect the lawful purpose intended. See RCW 9A.16.010 – Definitions. Necessity is based on the totality of the circumstances known by the officer at the time of the use of force.”

Assessing an officer’s split-second actions is not time to go to the Hollywood cop movie catalogue to back up your alternative that the officer should have shot the gun out of his hand rather than killing the armed felon. Or, instead of “shooting to kill,” the cop should “shoot to wound.”

Cops don’t shoot to kill—or shoot to wound. Officers shoot to stop the threat—period. Instructors drill this into officers. Center mass is the most prominent target for any human being, and that’s what they train cops to aim at to increase the odds of stopping a lethal threat.

As I was writing this article last night, I was on a text thread with some active and retired cops. One of the guys, still active, told us the following story:

“Talked with female Trooper last trip [cross state for work] when a car flew by traffic and nearly wiped a tractor trailer rig out. Reported via 911. She called me short time later noting she had pursued him on 90 at a lock of 124 mph and had to break off due to current no pursuit policy unless it’s BARK [felonies] passed by WA legislature. Burglary [ignore pursuing for this felony unless the burglar had just broken into the mayor’s house] Assault, Robbery or Kidnapping where loss of life has occurred or other aggravated circumstances prevail with the crime. She noted a sup [supervisor] would have to approve and she didn’t have one on duty. Just her and one partner in Ellensburg area. Blew my mind. He [reckless driver] continued on to Spokane without being stopped.”

In other words, the trooper did something else; she had to let the reckless driver go despite being a clear threat to public safety. If she’d decided to pursue, defying the new state anti-police laws, and the driver wrecked and killed hims

lf or someone else, the trooper likely would have been disciplined, fired, or, more likely, wound up in prison.

If the driver had killed someone without being pursued, I suppose that someone’s loved ones and the trooper would just have to live with it—because anti-cop idiocy forced the trooper to do something else—other than her job.

So, whichever version of something else is being used by those who sit in judgment of cops, believing they should have done something else but not offering any reasonable alternatives, it puts officers in an impossible position.

Instructors still tell recruits what they told me in the academy 30 years ago. If you do your job in good faith, according to policy and the law, you won’t get into trouble. But that’s no longer the truth—it’s something else.