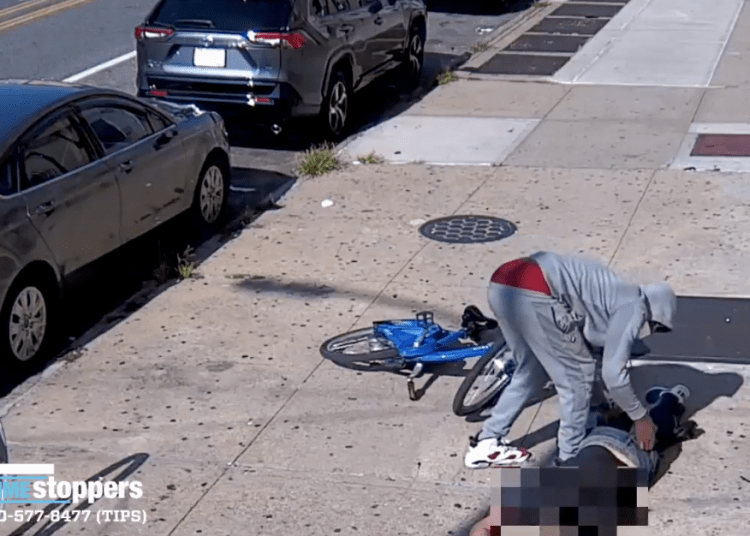 NEW YORK — NYPD released crime video Saturday, which shows a suspect pummel and stomp on another man’s head in a brazen daytime attack, knocking the victim unconscious and then rifling through the person’s clothing during a violent robbery.

The surveillance video shared by NYPD Crime Stoppers shows the horrific encounter, which took place Saturday at 9 a.m. near Pitkin Avenue and Barbey Street in Brooklyn.

The video shows a black man wearing a mask and a gray hoodie throwing several punches at the victim, who appears to try to fight back before being knocked to the ground, Fox News reported.

The brutal perpetrator repeatedly punches the victim in the head. As the man attempts to get up the suspect delivers a final blow with his foot to the man’s skull. The victim becomes lifeless as the suspect uses the man’s belt loops to flip the unconscious body over in order to rifle through his front and back pants pockets.

WANTED for A Robbery in the vicinity of Pitkin Avenue and Barbey Street. #Brooklyn @NYPD75pct on 7/24/21 @ 9:05 AM The perpetrator punched and kicked victim and removed his property. Reward up to $3500Seen them? Know who they are? Call 1-800-577-TIPS or DM us! pic.twitter.com/o5itGsfgL7

When the video footage began, a bicycle was already lying on the sidewalk, and the suspect appeared to have a black bag in one arm as he used the other arm to batter the victim.

Police are trying to identify the suspect who is wanted for robbery. A $3,500 reward is being offered.

Anyone with information is asked to call 1-800-577-TIPS or send a direct message to NYPD Crime Stoppers on Twitter.