Although the man was not killed after leaping from the building, he is listed in critical condition 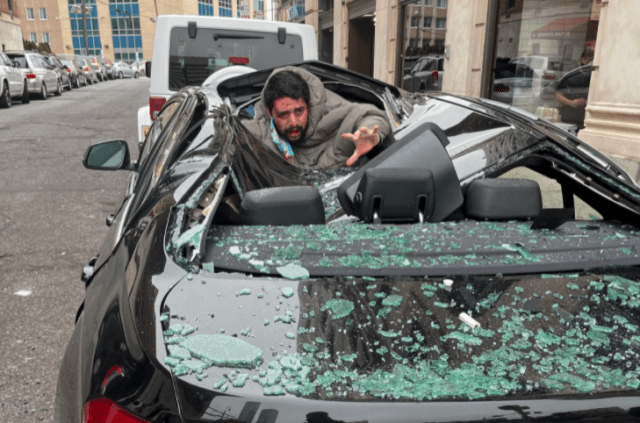 According to witnesses, the man survived and popped up after falling nine stories.(@Christinaabri_ via New York Post)

JERSEY CITY, N.J. — A man leaped from the ninth story of a Jersey City high-rise and landed on a BMW, crumpling the vehicle in the process. Miraculously, the man survived, according to witnesses.

After crashing through the roof of the luxury automobile parked on the street at 26 Journal Square about 10:20 a.m. Wednesday, the unidentified man stood up with a badly mangled arm and asked, “What happened?” according to onlooker Christina Smith.

“I heard a big boom and I didn’t think it was a person at first,” Smith told the New York Post. “The back window of the car just busted out — exploded. Then the guy jumped up and started screaming. His arm was all twisted.”

Smith immediately called 911, then took jaw-dropping photos and videos of the aftermath, including graphic footage of the man screaming in pain with upper-body injuries. He fell roughly 100 feet, according to the Post.

The man was eventually transported to a local hospital where he was listed in critical condition Thursday, according to Jersey City spokeswoman Kimberly Wallace-Scalcione.

Although police are investigating, Wallace-Scalcione said there are no suspicious circumstances connected to the case.

The jumper refused to give police his name and was not cooperating with the inquiry as of Thursday afternoon, a source familiar with the case told the news outlet.