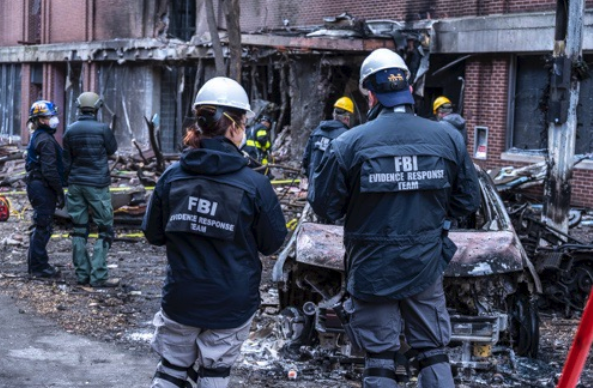 NASHVILLE, Tenn. — The Tennessee man accused of detonating a bomb in downtown Nashville on Christmas Day reportedly spewed anti-police rhetoric to a person he worked with, according to a recent report.

The FBI has confirmed that Anthony Quinn Warner died in the Friday morning blast near an AT&T building in Music City.

Several decades earlier, in the ’70s, Warner allegedly spoke about about his disdain for law enforcement, the Daily Beast reported.

Tom Lundborg told the website he was a teenager when Warner allegedly told him: “I hate cops. They’re all corrupt.”

These photos were taken in #Nashville at the blast site. #FBI and #ATF Evidence Response Teams (ERT) continue to process the scene of the Christmas Day explosion in Nashville, TN. The teams are searching for evidence to assist in the ongoing investigation. pic.twitter.com/zhit76L1k5

Warner and Lundborg worked together for Lundborg’s father’s security system company A.C.E. Alarms at the end of the 1970s, according to the report.

The business provided commercial and residential alarm systems. During one point, Lundborg’s father was incapacitated due to an automobile collision. As a result, that left a young Lundborg and twenty-something “Tony” Warner to run the business. During their pairing, they drove to different sites installing burglar alarm systems as well as servicing other types of calls.

“I worked with Tony as his helper. I kind of looked up to him. He was kind of a hippie. Had long hair, a Magnum, P.I. mustache,” Lundborg told The Daily Beast. “He was a smart, cocky kind of guy. I rode around with him all day every day—during the summers, at least for a couple years.”

The car rides would sometimes turn to conversations about police.

“Never trust a cop,” Lundborg recalled Warner telling him in one of the now decades-old conversations.

Lundborg said Warner disliked authority, loved smoking weed, and claimed he’d just gotten out of the Navy. (It’s unclear whether Warner was ever in the U.S. Armed Forces, but records show he was arrested for marijuana possession in 1978.)

Lundborg said he spoke to the FBI about Warner, as authorities try to piece together a motive for the Christmas Day explosion which injured eight people and destroyed multiple buildings.

In a recent conversation, one neighbor, Rick Laude, told the Associated Press that he and Warner chatted days before the bombing, and Laude asked, “Is Santa going to bring you anything good for Christmas?”

“Oh, yeah, Nashville and the world is never going to forget me,” Warner replied.

Laude said he didn’t think anything was strange about their conversation and that “nothing about this guy raised any red flags.”