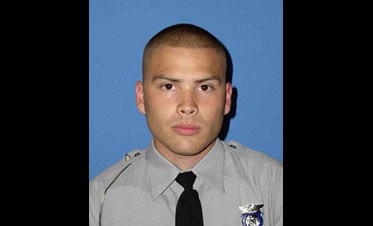 CANTON, N.C. — Authorities charged a Florida man with murder Wednesday in the shooting of a North Carolina trooper during a traffic stop the night before.

Blanton, a two-year veteran of the highway patrol from Sylva, was the first North Carolina trooper to die in the line of duty since 1997.

"Incidents like this remind us of what a dangerous profession law enforcement is," Secretary of Crime Control and Public Safety Brian E. Beatty said in a news release.

Wong does not yet have an attorney but is expected to appear with a lawyer at an initial court hearing Wednesday, said jail administrator Lt. Lucrecia Ray.

Blanton, 24, was shot twice Tuesday night on Interstate 40 after he stopped Wong's vehicle, which was towing a passenger car, Clendenin said. The trooper died at a hospital in Asheville.

The violation that prompted the traffic stop wasn't immediately known.

Authorities said a passer-by called police to report that Blanton had been shot and Wong was arrested shortly after the shooting by nearby Haywood County sheriff's deputies and Canton police.

Clendenin said Wong fled the scene with Blanton's sidearm, but it was not yet clear if it was used to kill the trooper. Authorities found weapons and narcotics in Wong's vehicle, the spokesman said.

Wong has 19 criminal convictions dating to 1996 that include armed burglary, assault with a weapon, carrying a concealed weapon, sale and possession of marijuana and escape, according to records from the Florida Department of Corrections.