'George Gascon doesn’t value my life or the life of my child,' victim says 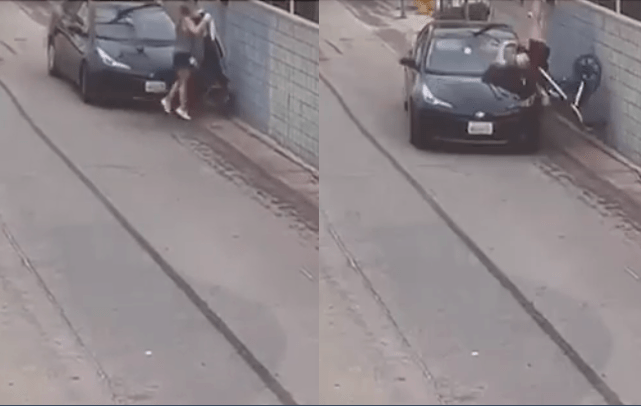 A California teen convicted of plowing a car into a mother and her 8-month-old son will spend just five months in a diversionary program. (Los Angeles County)

LOS ANGELES – A mother in Los Angeles who was mowed down with her baby by a hit-and-run teen driver is furious and lashed out at District Attorney George Gascon whose soft-on-crime policies allowed the defendant to get away with just five months probation, according to reports.

Horrifying surveillance video showed the suspect vehicle plowing into the mother, only identified as Rachel, as she pushed her 8-month-old son in his stroller down a Venice street the morning of August 6, 2021.

Rachel tried to get the stroller out of the way before they were struck. She was sent tumbling over the hood of the suspect vehicle.

As the 16-year-old driver tried to flee the scene, other pedestrians began chasing after the vehicle, which is then intentionally rammed by an oncoming pickup truck.

Rachel took aim at the top prosecutor in Los Angeles in a scathing victim impact statement once the 16-year-old driver was ordered to participate in a diversionary program following the crime, Fox News reported Friday.

The teen was charged with two felony counts of assault by means of force likely to produce great bodily injury and one felony count of hit and run, according to the DA’s office.

Yet the sentence is not commensurate with the charges, according to a retired police detective.

Fortunately, Rachel and her son survived the incident without serious injury, the New York Post reported.

Nevertheless, the mother referred to the attack as attempted murder and harshly criticized Gascon for continuing to treat juvenile’s with “the lightest touch possible.”

“I have never been more surprised or disappointed, and in fact I have never felt so victimized as I have by the system and current policies of LA’s DA, George Gascon,” she said.

“My heart breaks when I think about all of the other victims out there, less fortunate than me, whose murderers are getting lenient sentences and being released from prison before their sentences are complete.”

She added that she’d been told his record would be “wiped clean” when he turns 18, “How on earth can that be?” she said. “He tried to murder two innocent pedestrians. Murder. And we have video evidence. My child would be dead if I hadn’t been there to protect him.”

The woman said she would live in fear after the teen’s short sentence is finished.

“I thought those were the last moments of our lives; we were dead,” she added. “That feeling, along with the memory of a car accelerating directly into us, will haunt me forever.”

Gascon’s underlings stood by their decision, telling the New York Post in a statement, “The decisions made in this case were based on the facts and the law. … The Probation Department recommended and the court sentenced the minor to a youth camp for five to seven months, an appropriate resolution.”

The court affirmed an earlier ruling that said the directive not to charge strikes against defendants violates state law and the rights of prosecutors in Los Angeles County.

“On the merits, we conclude the voters and the Legislature created a duty, enforceable in mandamus, that requires prosecutors to plead prior serious or violent felony convictions to ensure the alternative sentencing scheme created by the three strikes law applies to repeat offenders,” the ruling said. “The district attorney overstates his authority. He is an elected official who must comply with the law, not a sovereign with absolute, unreviewable discretion.”

Once the rogue prosecutor took office in December 2020, he implemented a series of directives to dramatically alter how criminal cases are handled.

“There’s never been a case where a court had to tell a chief prosecutor that his job is to follow the law,” Eric Siddall, vice president of the group, told Fox News. “Just because of the nature of his job, he doesn’t get to ignore or break the law.”