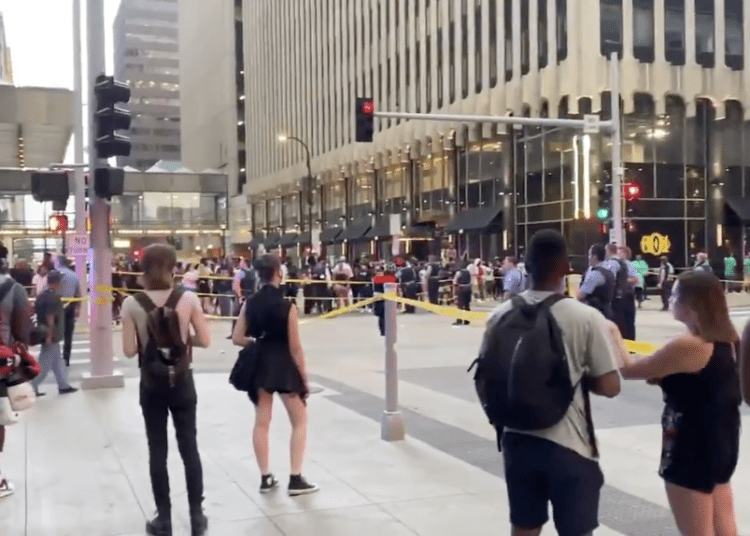 MINNEAPOLIS — A suspected gunman fatally shot himself Wednesday as Minneapolis police were moving in to arrest him for a homicide committed hours earlier, sparking looting in the downtown area, police told Fox News.

The man was with a female at a parking garage around 2 p.m. when they encountered another man, Minneapolis police spokesman John Elder said. The couple got into a confrontation with the man, who was fatally shot by the man who was with the woman.

Doesnt look locked down to me…

Looting is now taking place at the Nicollet Mall in Minneapolis after a man committed suicide while being pursued by police. Any excuse to riot. pic.twitter.com/LGVY7DVX6E

The couple fled on foot but the woman was taken into custody by police a short time later. Authorities searched for the gunman and found him just after 6 p.m. in the Nicollet Mall area, which is in the downtown area.

“As officers approached, he produced a handgun and shot himself,” Elder told Fox.

Surveillance footage of the shooting showed the man shooting himself near a group of people.

Officers did not fire at the suspect, he said.

More looting in downtown Minneapolis. They’ve now breached the Saks 5th Avenue store on 6th and Nicollet and people are making out with lots of goods. pic.twitter.com/tgUIyoIMvf

Looting inside downtown businesses occurred after the shooting. Officers were beginning to make arrests, Elder said.

After pleading with people to go home, Mayor Jacob Frey imposed an immediate curfew and requested assistance from the National Guard.

“What we’re calling for right now is peace,” he said. “This destruction and property damage just takes away from that underlying goal.”

Police Chief Medaria Arradondo dispelled misinformation that his officers were involved in the suicide death, saying it was not officer-related.

“I will not allow to add more trauma to a city that’s still grieving from May 25,” referencing the death of George Floyd.

He said one officer was injured, but not seriously.

Hennepin County Sheriff David Hutchinson told reporters downtown that deputies were assisting the Minneapolis Police Department. He urged people to go home and obtain the facts of the case before jumping to conclusions about what happened hours earlier.

“When the police do things wrong we need to hold them accountable, but this is not the case,” he told reporters. “We as the police, the Sheriff’s Office did nothing wrong tonight.”

Brit’s Pub in downtown Minneapolis is on fire. pic.twitter.com/WieEJ2qwz4

Minneapolis, it’s time to heal. We must rebuild and recover. Dangerous, unlawful behavior will not be tolerated. The State Patrol is headed to Minneapolis to help restore order. I remain in close contact with the city and every state resource stands ready to help bring peace.

“Minneapolis, it’s time to heal. We must rebuild and recover. Dangerous, unlawful behavior will not be tolerated,” he wrote. “The State Patrol is headed to Minneapolis to help restore order. I remain in close contact with the city and every state resource stands ready to help bring peace.”