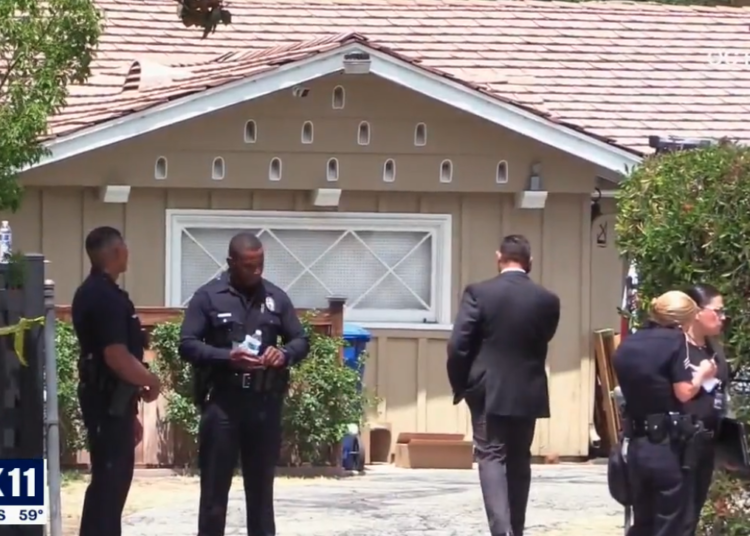 LOS ANGELES – A Los Angeles mother of seven has reportedly confessed to killing three of her children on Mother’s Day with the aid of her 16-year-old son, authorities said.

LAPD arrested Angela Flores, 38, Sunday night on three counts of murder for allegedly killing two of her boys and a 12-year-old daughter. The 16-year-old male was also taken into custody on one count of murder, CBS News reported.

LAPD officers responded to a report of an assault with a deadly weapon about 7:40 a.m. Sunday at the home on Victory Boulevard. Upon arrival they discovered the victims, Natalie, 12, Nathan, 8, and Kevin, who was believed to be about 10, according to the news outlet.

LAPD detectives said Flores confessed to killing her children with the assistance of her 16-year-old son. Prior news accounts said the teen rushed to a neighbor’s residence after discovering the crime scene. Now, he is implicated in the triple homicide.

The manner of their deaths have not been disclosed. Flores’ three other children live out of state with their father and were not harmed, the New York Post reported.

Police have not disclosed a motive for the horrific crimes.

Flores was booked at the Los Angeles County Jail. Her bail was set at $6 million.

Police said the 16-year-old son is being held at Sylmar Juvenile Hall.

LOS ANGELES – A mother in Los Angeles has been taken into custody after her three children ages 8- to 12-years-old were found dead at their home on Mother’s Day, according to the Los Angeles Police Department.

Police responded to the home in the 22500 block of Victory Boulevard around 7:40 a.m. on Sunday regarding an assault with a deadly weapon, KTLA reported.

Upon arrival, officers discovered three children — two boys and a girl — unresponsive at the residence, according to LAPD Officer Orris.

Authorities removed the children’s mother — described by neighbors as being hysterical — on a stretcher and carried her out of the residence, Fox 11 Los Angeles reported.

Neighbors say the mother was hysterical and screaming “where’s my bible” when she was detained and led out in a stretcher from the house where 3 children’s bodies were found @FOXLA pic.twitter.com/heW2hVeFiu

The news outlet said a fourth child — described as a teenage son — discovered the horrible crime scene and ran to ran to a neighbor’s house for help.

According to LAPD, the unidentified mother was taken to a hospital for a mental health evaluation prior to being arrested Sunday night.

“I couldn’t see anybody, and I kept hearing, ‘My family is abusing me,’ and just kept hearing screaming, but I couldn’t make out what she was saying,” neighbor Priscilla Canales told the outlet.

According to paramedics, the children had been dead for several hours before they arrived, Fox 11 reported.

A neighbor, Steven Hayes, spoke with both Fox 11 and KTLA. He said, “They were nice people. … There was no reason to suspect anything. … You would never think anything of it.”

“The lady was out walking around, talking incoherently,” Hayes continued.

When asked by a reporter if it was pretty shocking, Hayes replied, “Hell yes.”

LAPD said the investigation is ongoing and additional details were not immediately available.