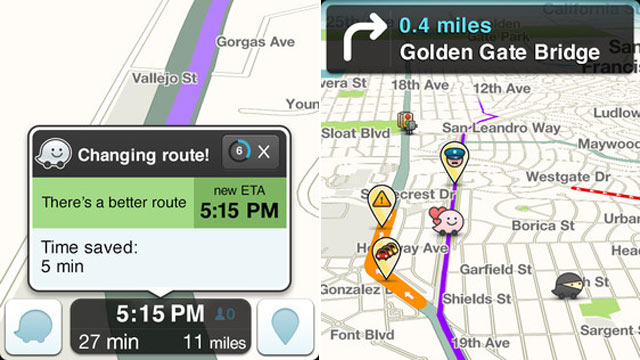 The Waze mobile app is a souped-up GPS program that not only provides directions to drivers; but those directions are dynamic and interactive. It’s geographically up-to-date and also gives the whereabouts of cheap gas prices, allows the operator to send a live route to a friend or chat with nearby wazers.

The true power of Waze over in-car or dashboard GPS systems is that it crowdsources traffic conditions. So a driver can also see when upcoming traffic will be congested and receive alternate routes to avoid large traffic tie-ups.

The app also has a feature that alerts drivers to the location of a police officer, and even whether they are visible from the roadway or not. The more concentrated the users of the app in a geographic area, the more accurate it is.

LAPD Chief Charlie Beck is among the police executives to voice his concern about the app. In a letter to Google (which bought the app in 2013), he stated that it isn’t always in the public’s best interest to know where the police are. Beck wrote: “There is a criminal element that are able to play their trade and ply their craft more effectively by knowing where police are.”

But Google, Waze and even many police officers say there’s no reason to change the app, contending that people have always had ways to know where police are and that Waze quite possibly makes roads safer because it makes people slow down. In a written statement, Waze spokeswoman Julie Mossler said Waze is partnering with the NYPD and “nearly 30 other Police and Departments of Transportation all over the world” to help municipalities “better understand what’s happening in their cities in real time.”

Thompson said it’s about much more than concern over people stalking police in order to harm them or that people might not get tagged for speeding. “We’re giving people a tool that’s going to take somebody’s life,” he said, and went on to describe his concerns that criminals such as child kidnappers might use the app to avoid police. “The first time a child dies [because the killer used the app to avoid police], shame on Google,” he said.

But what’s got the NSA particularly miffed is the refusal by Google and Waze to sit down and talk it over. Thompson said a previously scheduled meeting in February was cancelled by Google. “I hope it doesn’t take a tragedy for them to open their eyes,” Thompson said.

The NSA is building a coalition to include the Fraternal Order of Police, National Center for Missing and Exploited Children and Mothers Against Drunk Drivers in the hopes of putting pressure on Google to remove the police feature from the app.

For police officers trying to make sense of it all, perhaps the best idea is to get to know the app. Download it and understand how it works. At the very least, said Thompson, “If they’re hiding and someone identifies them, then at least they know they’ve been identified. If they’re out in the open, they know people know where they are anyway.”

Trying to make anything in social media go away hasn’t been met with much success historically. But another truth about social media is that the benefits always outweigh the risks. Whether the NSA and other law enforcement succeed in getting Google/Waze to remove the police feature or not, there’s much about the Waze app that police can use in their favor. Doing so may prove to be a more fruitful use of time and energy.