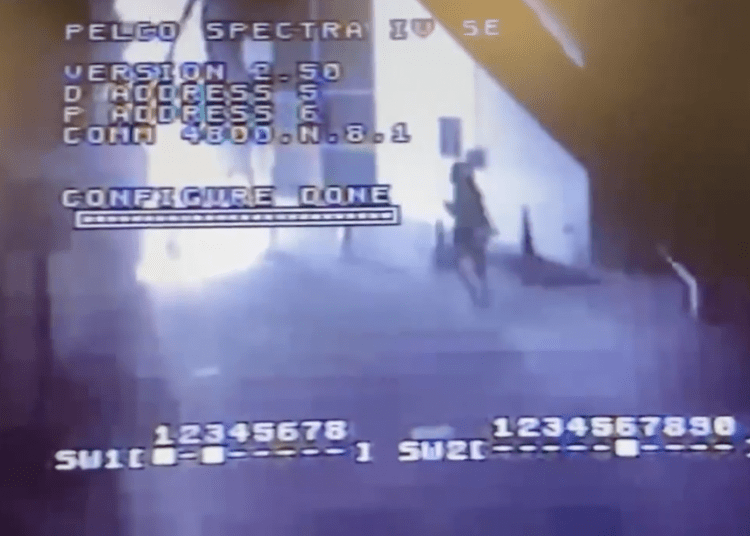 LAPD arrested a man who is accused of firebombing the Topanga Division early Sunday morning. (Twitter)

LOS ANGELES — A man who threw a molotov cocktail at a community police station in Canoga Park over the weekend has been arrested, officials announced Monday.

The incident took place about 12:55 a.m. Sunday, when a man identified as Jonathon Rosin walked up to the front doors of the Topanga Community Police Station at 21500 block of Schoenborn Street, KTLA reported.

Rosin is accused of lighting a glass bottle that contained a flammable liquid and threw it at the front window of the station, according to LAPD.

“Upon contact with the window the bottle shattered and ignited the flammable liquid,” the police press statement said. The flames were extinguished by a supervisor.

NEW: LAPD’s Topanga Division station was firebombed Sunday morning at about 1am. A source sent me this video, which shows a suspect throwing a Molotov cocktail against the doors. LAPD tells me officers witnessed it and chased the suspect down. Suspect is now in custody @FoxNews pic.twitter.com/gTozeuDwsR

Multiple LAPD personnel witnessed the incident on the station’s surveillance system. As a result, officers were able chase Rosin east on Schoenborn Street and he was eventually taken into custody at Canoga Avenue and Roscoe Boulevard.

During the arrest, officers said the suspect smelled like gasoline, KTLA reported.

Rosin, 24, of Los Angeles, was booked on suspicion of igniting an explosive and a misdemeanor warrant. He is being held on $501,000 bail, police said.

The LAPD’s major crimes division is investigating the incident with support from the Los Angeles Fire Department’s arson counterterrorism section.

“We are horrified that @LAPDHQ officers were attacked like this,” the LA Police Foundation wrote on Twitter. “Attacks on law enforcement must stop!”

Yesterday, someone threw a Molotov cocktail @LAPDTopanga . We are horrified that @LAPDHQ officers were attacked like this.
Attacks on law enforcement must stop!#LAPDhttps://t.co/MK0QhPLACK

According to Fox 11 Los Angeles, police said the suspect was uncooperative. A motive, if known, was not disclosed.