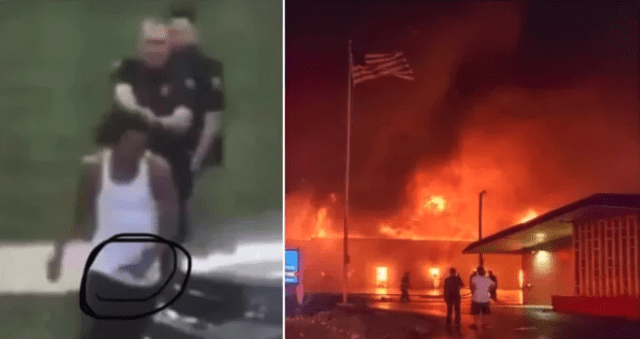 Aug. 23 is the Jacob Blake shooting anniversary. It has been one year since the justified shooting of Jacob Blake by a Kenosha police officer, who used self-defense to protect himself and children in Blake’s car. The media are using the anniversary to continue the drumbeat of the false narrative of police brutality with another round of misleading stories about the Blake shooting.

The liberal Milwaukee Journal Sentinel even started its anniversary story with an inflaming factual error, writing, “It’s been a year since Kenosha police officer Rusten Sheskey shot Jacob Blake seven times in the back.” So did the liberal Wisconsin Examiner, which wrote, falsely, “Neighbors took a cell phone video as Kenosha police officer Rusten Sheskey fired eight shots into Jacob Blake’s back. ”

False. What’s the truth? “Officer Sheskey shot Jacob Blake seven times in total. There were four entrance wounds to Jacob Blake’s back and three entrance wounds to his left side (flank),” reads the Kenosha County District Attorney’s report on the shooting, which resulted in the exoneration of the officer.

Facts matter. We believe the rush to judgment against Sheskey – by Gov. Tony Evers, by Lt. Gov. Mandela Barnes, and the media – helped incite the riots that culminated in parts of Kensoha being burned to the ground and the Kyle Rittenhouse shootings.

But even after the DA’s thorough exoneration of the officer, the media are still pushing false narratives. WISN-TV framed the Jacob Blake shooting anniversary through the opinions of Blake’s father. The Kenosha News covered a “Justice for Jacob Blake STILL” rally. Fox6 focused on how the officer acting in self-defense led to “police reform.”

“No charges were filed against Sheskey, who contended he acted in self-defense because he feared Blake would stab him,” the Journal Sentinel wrote. No, he didn’t just “contend” this – the District Attorney DETERMINED that he acted in self-defense in conjunction with a respected, retired former black police chief, who conducted an independent review of the incident.

The Examiner noted, “there were clashes between the protesters and right-wing, self-styled armed militias,” leaving out the fact that some of the left-wing rioters were also openly armed. (We were there, and we saw this with our own eyes. Watch our live stream as Kenosha burned here.)

The second man Rittenhouse shot, Anthony Huber, was rushing him and struck Rittenhouse with a skateboard as he chased him down.

The third man, Gaige Grosskreutz, was moving toward him with a gun.

In light of those facts, we thought it was necessary to remind our audiences of the actual “Factual and Legal Conclusions” in the DA’s report on Blake (we’d note, for what it’s worth, that the DA is a Democrat).

The DA’s report says, “Based on all of the material gathered in this investigation by DCI, the evidence establishes the following facts:”