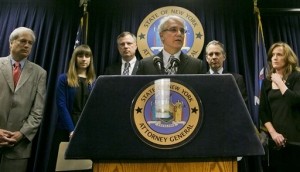 We can add to the list of ways a police officer can be fired when we include the results of a Supreme Court decision in 1963. The decision in Brady v. Maryland (373 U.S. 83) rightly ruled that prosecutors must disclose exculpatory evidence that the government has in its possession to the defense as part of its case. Exculpatory evidence is anything that might provide evidence that the accused could use to achieve a verdict of not guilty.

For example, if law enforcement is aware of a possible suspect, even if that suspect is never interviewed or contacted, but finds enough evidence that the defendant was the guilty party, the name of that suspect must be given to the defense. The defense may then pounce on the possibility that their defendant may not be the guilty party since another suspect was not properly eliminated by a thorough investigation.

Evidence that may tend to reduce the credibility of a witness’s testimony must also be released. A statement made during an investigation that is contrary to the testimony given at trial or was changed in subsequent interviews may help the defense challenge that testimony.

Since challenges to witness credibility is important to both sides in a trial, the attorneys can seek to reveal evidence of past unreliability or falsehoods. This includes police officers. Prosecutors who are aware of credibility problems with officers who may testify in a case must, therefore, disclose that to the defense. To facilitate this, prosecutors are required to maintain a list of officers who have been accused of misconduct, especially in cases where the officer is accused of making false statements or other dishonest acts.

The problem for many officers is that they have no way to appeal being placed on a Brady list. An officer who is not able to testify in court cases loses their value and can be fired. A Denver Post investigation requested the Brady list of each of the state’s District Attorneys but some DAs did not provide their list because they believe such lists are not a matter of public record. The reporters also found that there is no uniform policy across DA offices in the state about what qualifies for an entry on their Brady list. Some DAs don’t even know why an officer is on the list.

It may come down to a judge’s ruling in a particular case whether an officer’s reason for being on the list is relevant to their testimony in a given case. While the rule makes sense to bring an investigation’s shortcoming or misconduct to light for a fair trial, its arbitrary application from agency to agency can spell the end of a police officer’s career with little recourse.

In 2020, Lansing, Michigan Chief of Police Daryl Green discovered he was on a Brady list based on a 20-year-old incident. He had assisted medical personnel with a combative patient and didn’t believe that the event merited a use of force report. The patient complained. Green was placed on a Brady list with no notice, no due process, and no opportunity to rebut the claim. He was able to eventually get his name removed from the list.

Officer Travis Hamilton was asked by a reporter covering an impending court case about Hamilton’s inclusion on a Brady list. This was the first time Hamilton was aware that a list even existed. When he filed a public records disclosure request he found that he was on a list with ten other officers, some of whom were also unaware of the list. There was no notation as to the reason for his inclusion on the list. Seven months after his initial records request he submitted an updated request and was told that there was no such list.

After resigning over the resulting news article and controversy, Hamilton began a three-year quest to clarify officers’ rights regarding this career-killing procedure. As a result, the Iowa legislature now requires policies listing the criteria for placing a name on a Brady list, written notice to the officer with access to supporting records justifying inclusion on the list, a written notice of a prosecutor’s decision with the right to appeal, along with some other due process considerations.

More work needs to be done to make these procedures fair to defendants, prosecutors, and police officers and to define the level of offense and levels of proof offered before putting an officer’s career and reputation at risk unjustly.