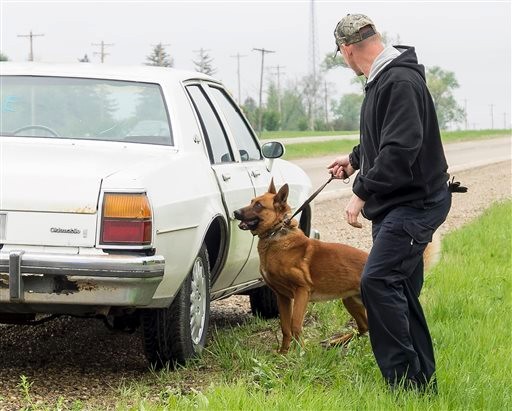 That's the core finding of a potentially influential new ruling from the 7th U.S. Circuit Court of Appeals, which considered the question of how much police should rely on their K-9 partners to justify searches when a dog's own competence, as in Lex's case, is itself suspect.

The opinion stems from an appeal by Larry Bentley Jr, a St. Louis man serving 20 years in prison for drug possession. He argued the 20 kilograms of cocaine Bloomington police found in his car during a 2010 traffic stop derived from an illegal search triggered by Lex.

While the court upheld the conviction, it disparaged Lex and suggested it might have considered tossing Bentley's conviction if police had relied solely on Lex's nose.

"Lex is lucky the Canine Training Institute doesn't calculate class rank," a 15-page opinion said. "If it did, Lex would have been at the bottom of his class."

Lex's trainer at the Bloomington-based dog school staunchly defended the 10-year-old Belgian Malinois on Wednesday, a day after the court's decision.

"The opinion is unfair and very one-sided," Michael Bieser said in a phone interview. He added about Lex, who remains on the job, "He is a very, very good dog."

As a consequence of the decision, he added, some effective drug-sniffing dogs could be kept out of service for fear their performance records will be similarly misconstrued by courts.

"Lex's overall accuracy rate … is not much better than a coin flip," the ruling says.

Bieser argued Lex's alert and false-positive rates on the street are misleading because they don't factor in times he detects drug residue or larger quantities police simply fail to find. Lex's success rates in controlled tests required for certification have been over 90 percent, he said.

He conceded Lex did fail one controlled test during the evidence-gathering stage of Bentley's case, calling it an anomaly. As a result, Lex was pulled from service for a two-week refresher course.

The court said it upheld Bentley's conviction in part because other indications at the traffic stop, including his contradictory statements, may have separately justified a search. It added that Lex's overall performance likely rose just above minimally acceptable levels according to criteria laid out by the U.S. Supreme Court.

But the judges make clear their concern that dogs that almost always signal for drugs could potentially provide police with a "pretext" to search anyone's car.

They also highlighted the practice of Lex's police handlers giving him a reward — a toy hose stuffed with a sock — each time he alerts, whether he's right or wrong about drugs, saying that "seems like a terrible way to promote accurate detection."

Lex's trainer says the institute doesn't instruct police to reward dogs after each alert. But dogs are so eager to please, he went on, they perceive pats or even encouraging tones of voice as a reward, so whether they get a toy reward is irrelevant.

Still, he says the Bentley case has forced the institute to alter one recommendation to police: From now on, while dogs are out on a job, never offer them a reward.

"We didn't do it because we agree rewards confuse dogs," he said. "But they will use the practice against us in court."