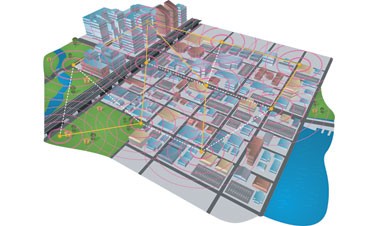 Once upon a time, police officers worked with virtually no communications they were on their own. Eventually, cities installed networks of call boxes. Officers were scheduled to call in periodically for welfare checks, and to receive assignments.

As departments began deploying mobile data terminals, the need for more and more communications capacity, sometimes referred to as throughput, became obvious. As more data began to flow between dispatch centers and officers in the field, the already-congested radio systems grew more and more bottlenecked.

The basic problem was that communication was limited to a two-way exchange between mobile units and a base station. As the numbers of mobile units increased, the load on the system became too great, leading to congestion. Each mobile unit still had to exchange information via a two-way link directly with the base station, like the spokes of a wheel. And any connection between larger data systems ran through the base station, creating an even greater bottleneck.

An additional problem was the over-reliance on the central base station as the hub for all communication. If something happened to the hub (e.g., a natural disaster), it affected communication throughout the system. Security concerns impacted the system in much the same way.

Finally, since public safety hierarchies were (and many still are) linear in nature, oftentimes there was little direct communication between field units from different agencies. Communications would have to travel to the hub, then across to the other agencies hubs and on out to the other agencies units. The resultant latency (lag time) was problematic. As we saw on Sept. 11, it could prove deadly as well.

Public safety agencies must interact with many other agencies and entities to exchange information. Today s communications systems must meet five primary requirements:

The technology that seems to lend itself best to these and other needs is commonly known as a high-speed wireless land-area network (LAN). Think of a basic wireless LAN as a wireless access point that communicates in two directions: outward to a receiver say your wireless-equipped laptop computer and backward to the Internet. If you have a wireless router in your home or office, you have the start of a wireless LAN. In a hotel, the Internet signal that comes into the building is often broadcast wirelessly by an access point, and is then picked up by other access points in the hotel and relayed out to various users in the hotel. In that way, the subsequent relays function very much like a repeater radio in an older patrol car.

There are three basic types of wireless LANs. In a first-generation system, each radio (or access point, often called a node ) provided both service (connections to various users devices) and backhaul (linkages back along the network to the wired connection). Congestion was common in these older systems. Additionally, because the number of hops from radio to radio were generally limited by system architecture, first-gen systems were not very effective for video and voice applications, primarily because of excessive lag time in transmission.

Second-generation technology improved on things by placing two radios in each node, so instead of one radio receiving and transmitting the traffic across the network, one radio would receive the traffic, and the second radio would transmit it. This system combined one radio on the 802.11b/g system for service and one radio on the 802.11a system for backhaul. While this did offer an improvement, heavy traffic could still cause congestion on the backhaul link.

As the technologies evolve, more and more departments are moving to different radio frequencies and technologies, some similar to cellular technology, to assure better operation of their networks. The second-gen systems actually used technology that was developed for use in indoor business wireless networks (i.e., Wi-Fi), while later systems rely on newer, more sophisticated and more reliable technology.

Such a network is primarily useful for moving data and perhaps video. However, agencies utilizing Voice over Internet Protocol (VOIP) technology can also use a wireless LAN as a backup for their voice communication.

In addition to the systems a municipality might install throughout a given area on light poles, traffic signals, etc. (sometimes called a fixed wireless LAN), mesh networking can be facilitated by installing equipment in individual patrol vehicles (a mobile mesh), usually through an add-on card in the vehicle s mobile data terminal or laptop computer. The architecture of this equipment is such that, as the various units roll up on a scene, each becomes part of the mesh, thereby expanding the network.

In the old days, as more units arrived on scene, they placed a greater load on the communications capability of the scene commander. In contrast, mobile mesh is actually strengthened by the addition of more units because each unit provides self-rerouting and self-healing capabilities for the mesh network. If a unit drops off the network or a node is taken down unexpectedly, the other units in the mesh reroute the traffic dynamically.

In addition to allowing communication between agencies, a wireless LAN can also increase the information flow between an agency s base and its field units. Field units can even gain access to centralized information, such as mapping systems, offender databases, hazmat databases and other critical data.

Agencies can also see a significant savings in time and expense by utilizing wireless LAN capabilities to allow field personnel to access various online applications and systems, such as report writing and filing, e-mail and Web-based research. Many elements of an employee s job that used to require time in the office can now be accomplished while the employee stays in the field.

High-speed wireless LANs will not replace two-way police radio communications, at least not for a long while. However, as an augmentation to existing communication structures providing a rapid method for transmitting data and an enhancement in officer safety and in maximizing employee capabilities in the field, such a network is well worth a serious look.

Stay safe, and wear your vest.

High-Speed Wireless Vendors Note: This list is not necessarily all-inclusive.

The below communities have installed various types of high-speed wireless networks.

Up to 200 police cars, fire trucks and ambulances.

220 nodes installed on traffic signals and light poles; and

Mobile access for more than 80 police and firefighter vehicles.

Steve Ashley is a retired police officer, and an active trainer and risk manager. Contact him at [email protected].