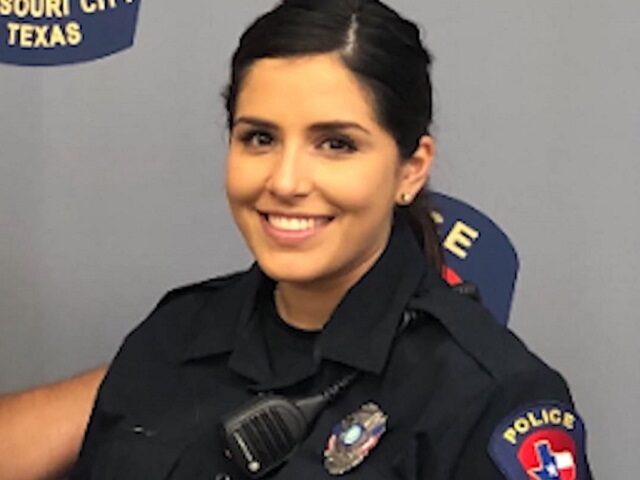 HOUSTON, Texas — A Missouri City, Texas, police officer is described as a benevolent warrior after her encounter with a carjacking suspect who shot her three times. Despite her serious wounds, she got back up and engaged the suspect until she could no longer stand.

Missouri City Police Chief Michael Berezin described Officer Crystal Sepulveda as a “benevolent warrior” following the incident that left her wounded with three gunshot wounds to her face, foot, and toe. “She walked into a no-win situation with an armed carjacking suspect who was bent on harming a police officer, and by the grace of God, she did not succumb to the many gunshots she received from this guy,” Berezin said during a press conference covered by KTRK ABC13 in Houston.

Breitbart News reports that 19-year-old Jeffrey Bundrent carjacked a vehicle on the north side of Harris County (Houston) Saturday night. Sometime later, police found the car and Bundrent at a gas station in Missouri City.

The suspect ran to the backyard of a house. Officer Sepulveda entered the backyard to search for the suspected carjacker when he opened fire on her. The gunfire struck the officer three times. One bullet struck her in the face in her right cheek and exited behind her right ear. The other two shots hit her in the left calf and in a toe on her left foot.

“Crystal Sepulveda is an outstanding person, not just an outstanding officer, and she is an amazing officer. She is a benevolent warrior,” Chief Berezin added. “”After she was struck, she did not stay down and lay there to die. She struggled back to her feet to try to complete the mission until she physically couldn’t, and the other officers got there.”

The suspect fled on foot and two Houston Police Department officers, a Texas DPS trooper, and a Fort Bend County Sheriff’s Office deputy pursued him to a yard back inside the Missouri City boundary. The teenager again opened fire on officers but did not hit them. The officers returned fire, sticking Bundrent in the neck, torso, arms, and legs. An ambulance transported the suspect to Ben Taub Hospital in Houston where he died from his wounds, KTRK reported.

Officer Sepulveda, the 28-year-old mother of a four-year-old boy told her chief she wants to get back to work next week. He added that her injuries would likely prevent that, but has no doubt she will return to work as soon as she can.

“These are humans willing to risk it all for something greater than themselves, and Crystal Sepulveda, Officer Sepulveda is the epitome of that,” The chief stated. “She genuinely cares about the community. She is willingly risking it all every day with all of the officers that I have here, so she just genuinely cares about people.”