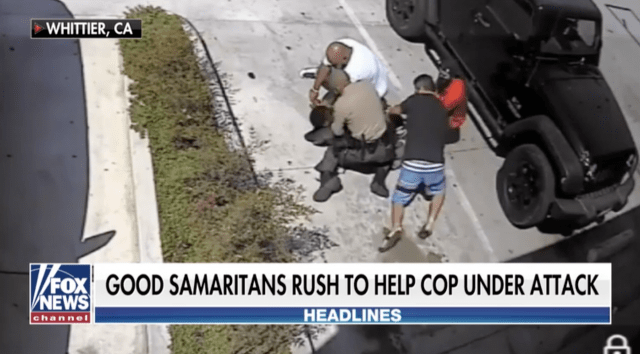 WHITTIER, Calif. – Three Good Samaritans are being hailed as heroes after they stepped up to help a California deputy who came under attack while trying to arrest a suspect during the weekend.

The Los Angeles County Sheriff’s Department said the incident happened Sunday in Whittier around 3 p.m., when the 23-year-old deputy was responding to a call of a homeless man creating a disturbance at a convenience store.

In surveillance video, the deputy can be seen moving in to arrest the man, who is acting erratically, when he starts throwing punches and the deputy loses his balance, falling to the ground.

In the seconds that followed, the homeless man attempted to grab the deputy’s weapon from the holster.

THANK YOU!
To the 3 brave citizens who helped a #NorwalkStation deputy who was fighting for his life. Susp tried to take dep's #gun from holster & citizen helped dep to retain it, magazine ejected.

Dep. being treated for minor injuries.

As a result, the deputy yelled, which caught the attention of Brian Whitney, who told FOX 11 he reacted immediately.

“I heard the officer yell ‘Get your hand off my gun,’ and as soon as I seen that I went down and ripped the homeless guy’s hands of the officer’s gun,” Whitney said Tuesday.

Moreover, two additional men got involved, including one who could be seen sliding the officer’s weapon away from the homeless attacker. The group was eventually able to subdue the suspect until additional officers arrived and arrested the man, who was booked on assault charges.

Whitney said the deputy personally thanked him afterward for helping out.

“I told him I wasn’t even thinking,” he told FOX11. “The only thing I was thinking about was your safety.”

The Los Angeles County Sheriff’s Department praised the actions of the three men, saying their efforts helped save a life.

“He was having a hard time with that guy, and without the help of the good Samaritans, I’m concerned about that,” Capt. Jim Tatreau, told CBS LA.

“We’ve had some very good citizens here in La Mirada, Whittier, and Norwalk. And it just reinforces your belief in being all together.”