Dwayne Johnson reacts to his look-alike in law enforcement: ‘Stay safe brother and thank you for your service’ 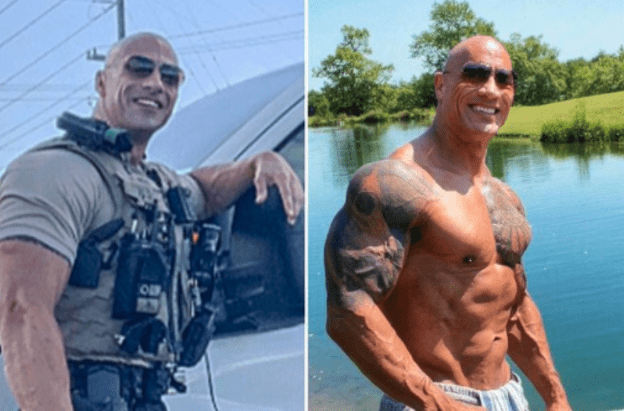 Dwayne “The Rock” Johnson reacted to the recent news stories comparing him to Lt. Eric Fields of the Morgan County Sheriff’s Office in Alabama.

The widely popular movie star took to Twitter on Monday and gave a shout out to the comparisons and to Lt. Fields, Fox News reported.

“Guy on the left is way cooler,” he said in reference to the lieutenant.

“Stay safe brother and thank you for your service,” Johnson added. “One day we’ll drink @Teremana and I need to hear all your ‘Rock stories’ because I KNOW you got ‘em [face with tears of joy, smiling face with horns, fisted hand and tumbler glass emojis] #ericfields.”

Oh shit! Wow.
Guy on the left is way cooler.
Stay safe brother and thank you for your service. One day we’ll drink @Teremana and I need to hear all your “Rock stories” because I KNOW you got ‘em 😂😈👊🏾🥃 #ericfields https://t.co/G38tOr68cW

MORGAN COUNTY, Ala. — They say everyone has a twin somewhere, and for a lieutenant from the Morgan County Sheriff’s Office, his lookalike is a very popular figure.

Patrol Lieutenant Eric Fields happens to resemble none other than Dwayne “The Rock” Johnson, one of the most beloved professional wrestlers of all time turned world-famous movie.

Fields, 37, is a 17-year veteran of MCSO, working assignments at the jail, investigations, special victims unit and with drug-endangered children before being sworn in as a Deputy U.S. Marshal. He was promoted to corporal and then worked from sergeant to lieutenant over patrol for which he handles tactical training and serves as firearms instructor, Al.com reported.

Last week when a local fan had to see the similarities for himself, the sheriff’s office posted this to Facebook:

This gentlemen recently ran into Sgt. Mason and informed him he wanted to meet our Deputy that people say looks like “The Rock”. Sgt. Mason passed that along and Lieutenant Fields was happy to swing by the Hartselle Wal-mart to see him. Tyler is one of their many hardworkers and it was great to meet him and some of his coworkers!

As you can imagine after seeing the similarities, Fields said the jokes are endless. Moreover, the comparisons don’t stop at Johnson. “I’ve been called The Rock and Vin Diesel’s love child,” he said. “I go along with it. It’s humorous. It’s flattering. It could be worse people, I guess.”

The lieutenant hopes his appearance allows him to connect further with the people of Morgan County.

“We really love to get involved with the community, cut up and be neighbors — not just enforcement,” he said.

Fields gets a ribbing from his family as well. His wife often buys him “The Rock” paraphernalia for working out. Nevertheless, despite people’s expectations to get as close as they might ever get to meeting Dwayne Johnson via Fields’ resemblance, he said he wouldn’t want to disappoint them and can only be himself, Al.com reported.

“I don’t want to disappoint anybody,” Fields said. “I walk up one day and at a different angle, I don’t know. It’s flattering, but it’s also a little nerve-racking as far as what others expect I guess.

“I just plan on being me. I’ll cut up. I’m a big cut-up. If it comes up and somebody says that, I’ll play along. I really couldn’t be anybody but me. I’m just glad I could be part of someone’s happiness and laughter.”