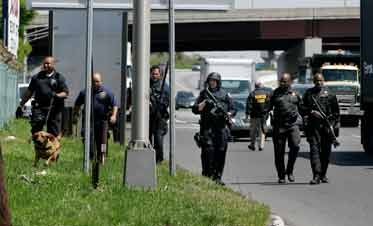 May 6–As the reward for the third suspect in the weekend slaying of Philadelphia Police Sgt. Stephen Liczbinski grew yesterday to more than $123,000, authorities intensified their wide-reaching dragnet for a man they called "armed and dangerous."

Police pursued leads from Lancaster, Pa., to Newark, N.J., in search of 33-year-old Eric DeShann Floyd, who they say was the "muscle" in a trio that on Saturday robbed a Port Richmond bank and then killed the pursuing sergeant.

But investigators believed Floyd, a convicted armed robber who in February escaped from a Reading halfway house, most likely was still hiding in Philadelphia.

Police Commissioner Charles H. Ramsey complained that the three men who gunned down Liczbinski with a high-powered semiautomatic rifle were repeat offenders who should not have been free.

"All three of them are career criminals," Ramsey said. "These guys aren't going to be rehabilitated. They need to be locked up — period."

Police yesterday stopped a NJ Transit train as it approached Newark after a police officer's daughter reported seeing a passenger matching Floyd's description. The man discarded a wig and escaped while authorities shut down Amtrak's Northeast Corridor for an hour to search the area.

Investigators believe that Floyd, who also goes by the name Hasim or Hasheem, has little money and few associates to help him escape. One police source said the entire take from the robbery, about $40,000, was recovered. So were several GPS tracking devices that helped lead police to the suspects.

Mayor Nutter, praising individuals and businesses that contributed more than $123,000 to a reward fund organized by the Fraternal of Police, called on Floyd yesterday to surrender.

"Face up to what you have done," the mayor said. "We can do this the easy way or the hard way."

District Attorney Lynne M. Abraham said that anyone helping Floyd to escape risks being charged as an accomplice in a homicide.

Floyd eluded police during the chaos that followed the holdup Saturday of the Bank of America branch inside the Shop-Rite store on Aramingo Avenue at 11:26 a.m.

Police said yesterday that Liczbinski was responding to a radio call about the robbery when he spotted the suspects' Jeep and followed it for several blocks to Almond and Schiller Streets in Port Richmond.

As the sergeant was getting out of his patrol car, a man identified as Howard Cain, 33, of North Philadelphia, fired the carbine from a short distance away.

Liczbinski, a married father of three who would have turned 40 today, was mortally wounded. His funeral is scheduled for Friday.

Police shot and killed Cain at 500 E. Loudon St. in Feltonville. Police said Cain had gotten out of a van and was holding a Chinese-made SKS carbine. They said the rifle had jammed and still had 25 bullets in its magazine.

A few blocks away, police apprehended Levon Warner, 39, a local boxer whose van was used as a getaway vehicle. Police said Warner flagged down officers to complain that his van had been stolen. Police did not believe him.

Federal agents yesterday traced three guns used in the robbery, two revolvers and the SKS. All were more than a decade old, said Tony Robbins, assistant special agent in charge of the Philadelphia office of the federal Bureau of Alcohol, Tobacco, Firearms and Explosives

"We're still investigating to see if any of the guns were illegally obtained — in other words, a straw purchase," Robbins said. "How they got into these guys' hands, we still don't know, but we believe they were legally purchased originally."

The SKS that police say was used to kill Liczbinski was originally purchased in North Carolina in 1996, according to the District Attorney's Office.

"Those rifles are made for warfare," Robbins said.

Ramsey said Liczbinski did not appear to have been wearing his department-issued body armor, but the Kevlar vests are designed to slow low-velocity handgun fire and are no match for military-style ammunition.

"That round would have penetrated the vest," Ramsey said. "It would not have made a difference."

Nutter, who has clashed with the National Rifle Association over his support for local gun-control legislation, called on the NRA to apologize to the slain officer's family. The NRA has opposed expanded controls on guns.

"There's no legitimate argument by the NRA — they need to get in the real world where the rest of us live and come to grips with these kinds of issues," Nutter said.

Liczbinski was the third Philadelphia officer killed in the line of duty in the last two years. All died from gunshots when they intervened in robberies.

A steady stream of civilians and police officers lined up to pay their respects at an informal memorial that sprouted where Liczbinski was shot.

"It just hurt me," said Tim Wilson, 37, a city corrections officer, who said he had met the two accused killers of Police Officers Gary Skerski, who died in 2006, and Chuck Cassidy, who was shot in October.

"You pray they get out and stay out," he said of some of the inmates he's come to know. "Then you hear about them committing another crime. I'm just getting tired of it. This stuff just needs to stop."

"They didn't give the man a chance," said Thomas Krajewski, 46, among the neighbors who rushed to the fallen sergeant's aid. "It's a travesty. It was senseless."

Colleagues praised Liczbinski as an alert officer with a capacious memory and an instinct for fighting crime.

"He just had a knack for being where crime was happening," said Capt. Joseph Zaffino, who was Liczbinski's commander in the Fourth Police District in South Philadelphia before the sergeant was promoted and transferred to the 24th District last year.

Zaffino said that Liczbinski and his partner, working burglary detail, would study weekend crimes for patterns. Liczbinski "could almost tell me who committed them just based on the description of the circumstances. That's the knack that this guy had for police work."

Police said they still may be looking for a fourth suspect. The getaway Jeep was reported carjacked on Friday by three men, including one whose description does not match any of the three named suspects.

Two of the bank robbers allegedly donned Muslim garb and the third hid behind a dreadlocks wig and a dust mask. Investigators found the garments in an alley blocks from where Cain died.

Floyd, Cain and Warner all professed belief in Islam while they were in prison, according to corrections officials.

Over the weekend, police searched at least 10 houses in Philadelphia and one in Lancaster belonging to Floyd's family and acquaintances. On Saturday night, they believed they were close to apprehending a suspect in Tacony Creek Park, using bloodhounds and a helicopter with infrared sensors.

Yesterday's search for Floyd on a NJ Transit train was triggered by a call from a woman to her mother, a Philadelphia police officer. The woman said a man matching Floyd's description was on the train.

The man fled after the train came to a halt. Police recovered the wig he left behind and hoped to find DNA that they could compare with evidence at Saturday's robbery scene.

"Someone that would intentionally fire upon and kill a police officer throws away all regard for life at any level at all," Ramsey said. "If they kill a cop, imagine what they would do to you."

A viewing for Sgt. Stephen Liczbinski will be held at 6 p.m. Thursday at John F. Givnish Funeral Home, 10975 Academy Rd. in Northeast Philadelphia. Visitors who park at Archbishop Ryan High School, 11201 Academy Rd., can take a shuttle to the funeral home. A second viewing will begin at 7:30 a.m. Friday at the Cathedral Basilica of SS. Peter and Paul, 18th Street and Ben Franklin Parkway.

A Funeral Mass at the cathedral will follow at noon. The burial will take place at Resurrection Cemetery, 5201 Hulmeville Rd., Bensalem. Donations can be sent to: Stephen Liczbinski Family Memorial Trust Fund, 901 Arch St., Philadelphia 19107.