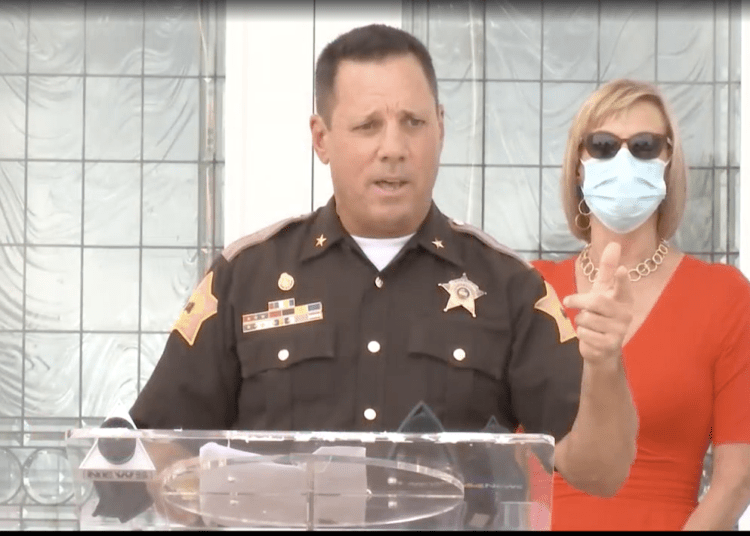 “Sheriff Wedding says the switch is to make a statement against what is going on nationally with civil unrest and negative attitudes towards law enforcement,” according to 14 News.

“I’m tired of people defying God, our church, our police, our government and everything we stand for.”

At the event outside White Stallion Energy, Wedding told the crowd he believed his record of working with Democrat and Republican leaders would help him maintain those relationships in the future.

However, the sheriff declared that he was “tired of seeing fires set in our streets. I’m tired of people defying God, our church, our police, our government and everything we stand for.”

The sheriff was twice elected as a Democrat. He pointed to a large American flag nearby and said Democrats wanted to “burn that thing every day,” reported Breitbart.

“Watching the daily burning of American flags, failing to be able to use the word “God” in any sentence at most Democrat-led functions, denouncing law enforcement as if we’re the evil people. I am very proud of my profession in law enforcement and when people attack us, it’s pretty insulting.”

The Democratic Party of Vanderburgh County expressed disappointment once the sheriff made his announcement.

“His move to the Republican party after benefiting from years of Democratic support make his political opportunism all the more distasteful,” the party said in a statement.

However, Wedding was not the first local sheriff elected as a Democrat to change his party affiliation, the Evansville Courier & Press reported.

Shoulders faces a challenge from Republican Zac Rascher on Nov. 3, the report concluded.