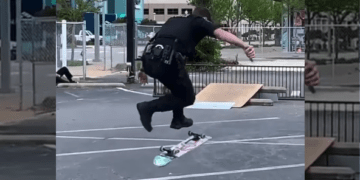 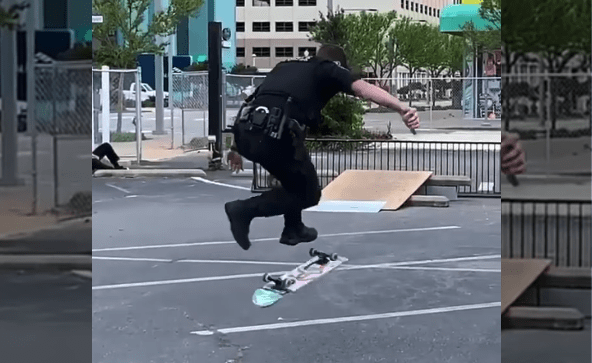 VIRGINIA BEACH, Va. – The world of skateboarders and police officers sometimes clash, but last week the two combined in a brief moment of harmony.

Instead of chasing away skaters from the Oceanfront, Virginia Beach Officer Ryan Borman, 23, wowed them with a couple of impressive tricks, The Virginian-Pilot reported.

While still in uniform, including the weight of his vest and gun belt, Borman pulled off a kick flip and a 360 flip. These are two technical moves that involve spinning and flipping the board under one’s feet and landing back on top.

A spectator caught the moment on video, which has since received more than a million views on social media

Borman made the moves look easy, even though he had the added weight of his gear.

“It actually took a couple of tries,” Borman said in an interview. “The gear’s pretty heavy.”

Borman is no stranger to the skateboarding scene. He grew up hanging out at the Virginia Beach Oceanfront and graduated from First Colonial High School before becoming a police officer in 2018.

During the chance encounter on April 21, he didn’t set out to become a social media sensation. The video, which was posted Wednesday on TikTok, stemmed from a random encounter between Borman and an old friend from high school he spotted skateboarding in an empty parking lot.

On a whim, Borman asked to borrow a board.

Sergey Whitney, a Chesapeake videographer, was there to hit record, according to Virginian-Pilot.

“This is something you don’t see every day,” said Whitney, 27. “I was very shocked in a great way.”

“It’s definitely insane,” Borman said. “I didn’t expect that at all.”

Borman’s aware that the skateboarding community doesn’t always look favorably on law enforcement, but he hopes when people see the video it will help bridge the gap.

“We’re everyday people just like them,” he said. “I grew up doing the same exact stuff they’re doing now.”