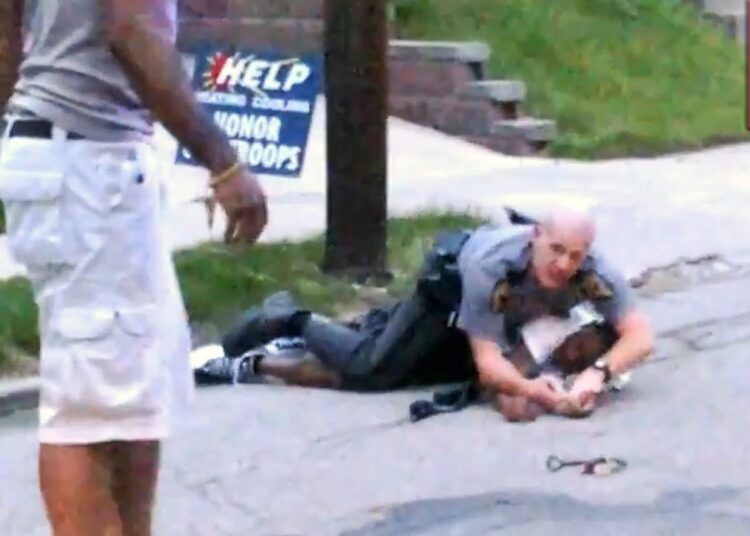 Through recency, we’ve all clenched our jaws and gnashed our teeth after seeing tons of uploaded recordings of cops wrangling with resistant wrongdoers while trying to effect arrests…as pop-up video-taping do-nothings fantasize about TMZ buying their footage. Ugh!

Those coming to the aid of cops, however, deserve the accolades and whatever recognition they are receptive to. Like law enforcement officers, Good Samaritans typically prefer low-key mode and avoid limelight exposure, implicitly downplaying heroism via philosophies such as Just doing my job and Just doing my civic duty.

Nonetheless, they deserve at least a modicum of attribution, like cameo appearances, without the news crews shoving mics in their mouths.

Although I have no idea what preceded the following caper, I do know that two separate citizens, one operating a pickup truck and the other a motorcycle, duly aided police officers in pursuit of a vehicle on what appears to be an Interstate or major expressway. How so? They each had a cop hop on and then drove them to where the bad guy was running, effectively taking him down.

Get a kick out of the policeman piggybacking to the scene after hopping on the back of/with a motorcyclist?

Speaking of piggybacking and hopping on to the back, this next one involves a martial arts warrior backing a San Antonio police officer ground-fighting with a resistant suspect.

A sole San Antonio police officer trying to arrest a man wound up going to the ground with the suspect. The bad guy stuffed his arms under him to bungle the handcuffing phase before the eventual ride to county jail.

This happened in the middle of the street. Someone noticed—a citizen who had moves of his own, who unhesitatingly, without footwear, ran to the wrestle and keenly employed martial arts maneuvers on the suspect, effectively enabling the cop to secure the criminal combatant.

Take a look and have a listen (note: suspect’s unlaundered language ahead):

An assist within an assist came from this particular instance: the narrator of the street-fight footage was so moved by what he witnessed that he openly offers to “sponsor” the officer for a “free Gracie Survival tactics instructor certification course anywhere in the country.”

The “BJJ” stands for Brazilian Jiu-Jitsu, which “focuses on the skill of taking an opponent to the ground, controlling one’s opponent, gaining a dominant position, and using a number of techniques” to achieve submission. (This martial arts strategy is the one members of my department trained in, at a local Gracie Survival training center. Boy was it a hit among our cops! It was on their own time and dime.)

In the brief video clip, the citizen helped the cop both physically and mentally as the bad guy put up a fight and spewed some psyche-taunting words during the scuffle before the cuffing. Steve Pomper’s piece “Wrist Lock: New Documentary Reimagines Martial Arts in Modern Policing“ correlates to this particular incident.

Incidentally, notice the gun grab by the bad guy (at 00:33), trying to wrest away the officer’s firearm, and the martial arts-skilled citizen whose keen eye helped circumvent what could have been an explosive and graphic scenario.

Also, the shadows on the ground indicate other civilians, apparently recording the event as well as securing the cop’s equipment which came free during the struggle.

An excerpt from the Comments responding to this cop/citizen arrest paints the point perfectly:

“The world is getting beyond crazy and hopefully this inspires us all to be more humble and helpful. Good job to both and thank you for your service to both.”

This next one recently circulated police-centric forums via social media platforms. It shows a police officer conducting a traffic stop, safely positioning herself on the passenger-side, at first. She introduces herself and tells the driver she stopped him for unlawful speed. She repeats the reason for the traffic stop, followed by requests for him to produce his driver’s license and proof of insurance.

Then she starts looping around to the driver-side, reacting to the operator abruptly exiting the front seat and reverting to his backseat. The officer asks, “Why are you getting out of the car, sir?” to which the driver contemptuously replies, “So I can give you my driver’s license.”

That’s a no-no, typical of someone lawfully detained yet wanting to do it their way.

The officer skirts the rear of the driver’s car as he reaches in. With the propensity of hotheads grabbing for guns (especially nowadays due to propagandized psyches boldly challenging law enforcement, coldly firing at cops), the policewoman realizes he just upped the danger levels. Luckily for both, he had hold of his wallet, not a firearm.

That kind of furtive movement and temper flare-up from anyone lawfully detained will heighten the barometer of officer safety, hence her next move.

With the feistiness sizzling from the male driver, the female officer directs him to the safety of the sidewalk and out of the active roadway. She asks him to “have a seat.” That seemed to ignite his short fuse; he becomes confrontational with the officer…extending his arm and pointing his finger at her chest while denying her directive.

Some expletives touched the air.

It went downhill from there, literally. After a brief standing-position scuffle, both went down to the ground as a male bystander dodged in with bodily momentum, ensuring an earth-kiss.

Then came the citizen cavalry, each from different cars and trucks, running up to join the fray and assist the policewoman, safely securing the hyped and resistant driver.

Each of the five or so citizens disperse and go on about their lives as swiftly as they came in with the pro-police spirit (more on what is coming their way, in a moment). These folks flooded in from the periphery, did their civic duty, and blended into the everyday flow of life. These great people pedestaled public safety and unhesitatingly aided the law officer going it alone.

Gotta love locales whose citizenry exudes responsibility to those fighting the good fight, the opposite of the many cities where people spectate for sport and hype over spilled blood, in frenzied states exclaiming “I got it all on video!”

By the way, this citizens’ aid of a police officer occurred on Lost Nation Road. Not at all lost in Willoughby, Ohio.

Willoughby police Chief Jim Schultz conveyed the following accolades to the cluster of saviors as well as the entirety of the community:

“I would like to personally thank several great Samaritans and our wonderful community for their quick action and support. On Saturday afternoon around 4:25 pm, several people assisted our Department during an incident on Lost Nation Road. If you stopped and assisted, please give me a call at 440-953-4229.

“I am so proud of our community and the tremendous support we receive on a day-to-day basis. Saturday was another awesome example. I greatly appreciate it!! Thank you!”

Sometimes things happen so fast that the civilian heroes who readily get in the mix and help police in perilous grappling incidents (when a lone law enforcement officer is fighting with a suspect who grabs for the cop’s firearm) sort of meld quietly into society’s flow, unidentified, thus unheralded for his/her heroism. In such instances, police departments turn to the media to help locate upstanding folks who deserve police recognition and awards.

Other times, additional police officers arrive and record the names of heroic citizens who aid and/or save cops’ lives. In May 2021, a Modesto police officer wound up on the pavement when an auto burglary suspect resisted the investigator. Down they went…in came the civilian cavalry to help effect the arrest. Right on time, as this suspect also grabbed for the cop’s gun:

Law enforcement entities all around the United States hold awards ceremonies for their crime-fighters, non-sworn support staff, and citizens aiding cops confronting wild behavior. Often fighting solo, these police officers are reassured that our nation, somewhat saturated with misguided hate for LEOs and disdain for law and order, has “Good Sams” ready to jump into the mix of malcontents clawing to have it their way.

“We are pleased to be able to recognize our officers and citizens for their exemplary acts and performance!” said Thomasville Police Chief John Letteney, at the Georgia department’s police and citizen awards ceremony, recognizing a community member who helped police.

In the Modesto incident, several Good Samaritans were identified and justly rewarded…

“We are beyond thankful for the help these brave citizens provided to one of our officers yesterday while attempting to take a subject into custody.

“They no doubt prevented a bad situation from escalating into something tragic and helped get the subject into custody safely.

“Today these Good Samaritans (Ross, Robert, and Yajaira) were presented with MPD Challenge coins for their exceptional bravery and willingness to step up and help an officer in need!”

Good folks in our beloved country never disappoint. These cops and others know the true fabric of American society, despite the dogma of the anti-police party trying to plunge nonsense down our gullets.

The severe reality is the police have been neutered and the bad actors have been Botoxed. Thank goodness for upstanding citizens who lend helping hands in the tangles of public safety and jump in for justice.