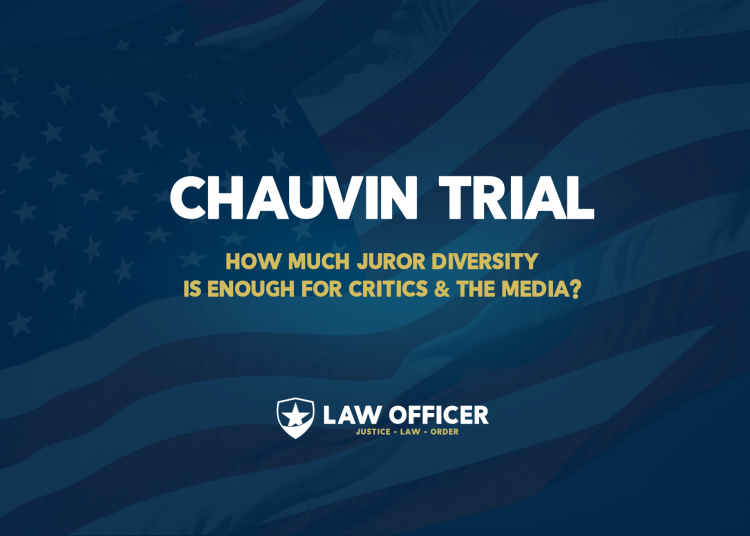 Minneapolis, Minn. — The jury for the Derek Chauvin Trial has been set. And since this case is all about racism, or so we’re told, the racial diversity of the jury must be acknowledged: the 12 jurors and three alternates include three black men, one black woman, and two jurors who identify as multiracial. In other words, half of the jury responsible for determining Derek Chauvin’s fate are black or multiracial, presuming that none of the alternates are needed.

Ideally, race shouldn’t matter. And race shouldn’t play such an important role in jury selection, or play second fiddle to fairness or the ability to think objectively and reasonably. But considering all of the protests that took place in the past year, and all of the recent protests in Minneapolis with people screaming about a racist jury—before it was even selected—perceptions of race have certainly overwhelmed American jurisprudence.

Even though the jury is “less white” than overall population of Minneapolis itself, there are still plenty of angry critics. Which draws an important question: Is “justice” and “fairness” before a jury of your peers even possible in this case?

If you listen to the race-obsessed critics, their demands and rhetoric suggest that this trial is about something other than the facts and fairness. And especially so if you consider that in Hennepin County, where the trial is being held, the population is 17% Black or multiracial, and 74% white.

But obviously, there is a huge problem here. According to many critics, there should not only be more blacks—but the “right kind” of blacks and minorities, so we are told.

For example, according to National Public Radio and others, “the jury’s basic racial breakdown glosses over some important nuance” because two of the black jurors “are not African Americans but, rather, Black immigrants.”

Obviously, such criticism belittles immigrants. And obviously, “nuance” glosses over the race-obsessed hypocrisy here. But notice how discussing racial “nuance” seems like an attempt to divert our attention from the truly important things we should look for in a competent juror, like objectivity and impartiality.

Absolutely, such diversions give race-mongering critics a way to shove facts, evidence, and fairness aside. And discussing “nuance” has become a diversionary tactic of choice while attacking any sense of fairness, objectivity, or moderation that any juror or any reasonable person may hold.

It seems many race-obsessed critics were offended because the “Black immigrants” expressed “moderate” views on policing and race relations during jury selection. And it’s likely that critics were also probably furious that “none of the black jurors” spoke about “personal experiences with racism or about having had overtly negative interactions with police.”

Consequently, it seems being “moderate” is a bad thing—even though it is precisely what is required of anyone tasked with weighing evidence to determine the fate or another human being, and whether they will remain in prison for life.

Of course, perceptions matter. And we should never discount “personal experience,” or whether someone is black, white or anything else. If the critics were truly anti-racist, then the racial composition of the jury shouldn’t matter. If a potential juror can’t be objective, and cannot listen carefully to the facts, then they have no business being on a jury, whatever their race, religion, or ethnicity may be.

Yet there’s an even bigger problem: racial bias might be problematic, but media bias in this case has already proven catastrophic.

There has been plenty of one-sided media coverage related to this case, and plenty of incoherent and crazed ramblings for the past several months as well. And instead of racial nuance, the media should be far more self-concerned. They should be holding themselves accountable for making it nearly impossible to find an unbiased juror, or anyone of any race or creed who has not already been influenced by the excessive media coverage of this case. And they should be awfully concerned about how they’ve already judged this case—without any actual evidence or testimony—in the court of public opinion.

We have reported on many aspects of the evidence in this case since last June, while the mainstream media has ignored practically all of it. Instead, they have used this singular incident—involving a man who ingested fentanyl laced with methamphetamine—to presume guilt and falsely bear witness to the need for radical changes in American law enforcement.

As it often happens with crime, the truth is in the consequences. And in this case, idiotic criticism and prejudiced media coverage has influenced some truly devastating consequences: including the biggest spike in violent crime in American history, a mass exodus of cops, and close to two thousand additional homicide victims who are predominantly black.

If a jury acquits Derek Chauvin, the media will be exposed as fraudsters, and they will likely point to racial “nuance” to blame “racist” jurors as part of their excuse or to pass the blame.

And that’s why the media is already complaining about the racial composition of the jury—even with 50% non-white racial composition. Media outlets already seem to be rolling out their “back up” plan hoping that America will once again fall for their lies. After all, even without a jury, and even without a trial, the outcome of this case already seems to have been decided by the media.